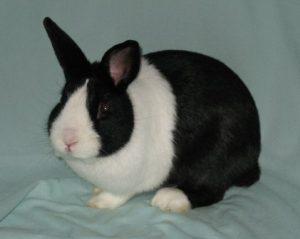 Dutch rabbits are small and cute and are popular in the show ring. It is easy to see why they are a favorite for both pet owners and breeders alike. Dutch rabbits make marvelous pets, especially as house rabbits. As children’s pets they need to be neutered otherwise they can bite. Part of the enjoyment of this breed as a pet is that when they run they almost appear to be dancing.

They have strong personalities and need companionship. Dutch rabbits are very popular and easy to find. The Dutch, being a small and compact breed, doesn’t need a very large cage, so they can be kept inside easily, though they do need space to run. Dutch Rabbits are not very high strung and for this reason most do very well in the show ring. In addition, they make outstanding mothers, if you want to breed them.

All in all the Dutch is an excellent breed for anyone who loves rabbits, and is an excellent beginner rabbit as well. Dutch Rabbits usually live to be 10 years old if they are spayed or neutered. If not they usually live up to be 5 or 6 years. The Dutch generally weighs four to five pounds and is a relatively small and stocky breed.

The Dutch has unique markings, almost resembling a tuxedo, which is why it is sometimes known as the Tuxedo Breed. They have a white vertical strip down the middle of their face, on their chest, front paws and half of their back paws. The other parts can be black, chocolate, blue, steel gray, brown gray, yellow, or tortoise.

The only colors recognized by the American Rabbit Breeder’s Association are black, chocolate, blue, steel, brown gray and tortoise. They have short fur that is smooth and glossy. In a show, senior bucks and does are those Dutch rabbits that are six months and older and they may not weight more than five and a half pounds, or less than three and a half pounds. They should have firm skin and bright eyes. 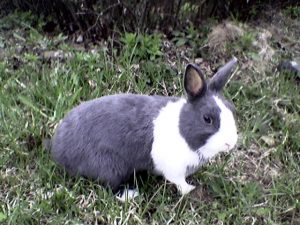 They can be disqualified for wrong colored or discolored eyes, white markings where there should be no white, and colored fur where there should be white. The Dutch is a very old breed, originating in a part of Belgium that used to be owned by the Dutch. The English were first introduced to the Dutch in 1864, where they perfected the breed. The breed continues to enjoy immense popularity in the United States.

The Dutch Rabbit is a small rabbit and therefore does not need a huge hutch. A hutch measuring 6ft x 4ft by 2ft high is the minimum, and they should always have access to a run.