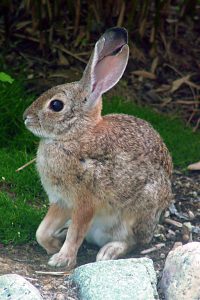 Their diets are supplemented with bark, cactus pads, mesquite pods, prickly pear fruit or on occasion, stealings from local crops! These rabbits, like many domestic rabbits, are coprophagic, meaning they must eat their own feces in order to get full nutritional value from their food.

They produce green and brown feces, and only the green are reingested. Desert Cottontail Rabbits do not generally drink, rather getting their water from water droplets or dew on the plants they eat, and from the plants themselves. Desert Cottontail Rabbits do not generally stay in burrows, preferring rather to hide out in the shade of bushes or thickets. 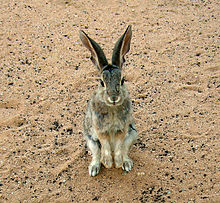 They will also crouch low and freeze to blend in with their surroundings and hide. Unlike lone Jackrabbits, Desert Cottontails live in colonies and quite enjoy the company of their peers. Desert Cottontails are sandy or buff in coloration, and have large puffy white cottontails, of course! Their fur is lined with black on the topsides of their bodies, and white on the undersides. 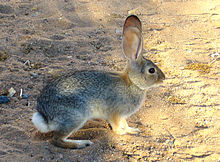