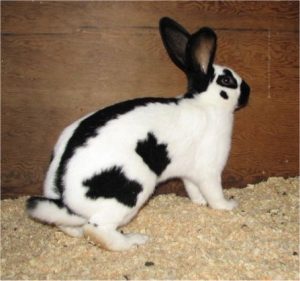 The Checkered Giant is a beautiful, large rabbit with unique markings. Many people have taken great delight in watching these graceful and equally stunning rabbits in the show ring. Checkered Giants are prized in the pet trade for their unique personalities and temperaments.

In general, bucks usually make better pets than does because they are typically less territorial then the females. There are of course exceptions to this rule. Checkered Giants should be handled regularly so that they will remain used to handling and stay tame. Some report that infrequent handling can often lead to wild rabbits.

Their gracefulness is exhibited at shows where they run up and down a table for judging. Some people have assumed that the Checkered Rabbit would be wonderful for commercial use, because of its large size. Size is not everything. These rabbits have very heavy pelts, and they don’t have small bones.

These two things make them less than desirable for commercial use. They are also slowly maturing rabbits, making them not ready to breed quickly, which is another problem for commercial breeders. The average life span of a checkered giant rabbit is about 8 years old if they are not shown hard or bred hard.

The Checkered Giant standard suggests and ideal weight of 11 pounds for males and 12 pounds for females, but many Checkered Giants are significantly larger, weighing 15 pounds. The standard calls for medium to medium-heavy bones, rather than large bones and heavier rabbits, such as those over 17 or 18 pounds may be judged as having “bad bones” – because they are too heavy.

They must have a butterfly-shaped spot on their nose, circles around their eyes, spots on their cheeks, dark ears, and marks on their spine and sides. The markings may be either blue or black, which are the only two varieties of the Checkered Giant. The markings need to be clear and easy to see, so they should have shorter fur. The rest of their body can only be white.

In 1904, a man named Otto Reinhardt from Reinfalz, Germany took a Reinish Checker Rabbit and crossed it with a black Flemish Giant Rabbit. From that line comes the modern day Checkered Giants. The first Checkered Giants arrived in the United States in 1910. Some have also theorized that wild rabbits were used on creating the original lines.

Because the Checkered Giant is larger than average, they need bigger cages and more feed than some of the smaller breeds. They should be housed in enclosures with solid caged floors. The cage size should be 3 feet by 5 feet by 2 feet tall to allow plenty of movement for proper growth and health.

They should be given hay or straw for bedding, pine shavings are may be used but it can irritate the eyes and provides no extra source of fiber in the rabbits diet – so it is not ideal. If you feed grass, make sure it does not have chemicals on it. For hay, Timothy hay is a better choice than alfalfa, because alfalfa tends to have too much protein, which can make a rabbit sick. Additionally they can be given fresh veggies and vegetable greens. 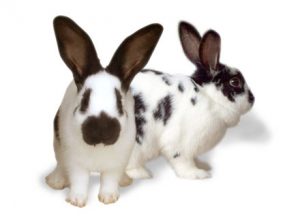 The Checkered Giant is a slowly maturing rabbit. They do not reach sexual maturity as quickly as other breeds, and henceforth they cannot be bred as early. The average Checkered Giant will start breeding from the time they area a year to a year and a half old. The average gestation time is 30 to 34 days – with the average litter ranging between 11 and 14 babies. The nest box needs put in about three days before your doe is due.

This gives her time to get it ready for the babies. You can use timothy hay for the nest box because the babies will usually nibble on the hay once they are ready to begin eating solid food. After the mother has given birth it is important to check on the babies. To do this all you need to do is pet the doe and touch the babies. It is important to touch all of the babies so that they have the same smell.

If any are dead take them out of the cage immediately and dispose of them. If you don’t remove them promptly the mother will eat them and any of the babies with the smell of the dead one may be eaten as well.