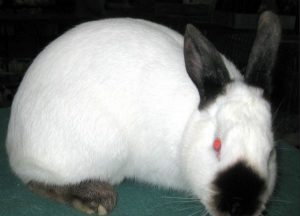 The Californian is a very good-looking rabbit, with Himalayan type markings. Their body should be pure white, with deep colored points in black, brown, blue, or lilac. The points should only cover the nose, ears, feet and tail. Also, they should have ruby eyes.

The Californian is rather large for a rabbit, averaging about nine or 10 pounds. Since the Californian was bred for commercial purposes, it has a plump, meaty body. They have a medium length body. When showing a Californian, there is only variety. Junior bucks and does are under six months old. 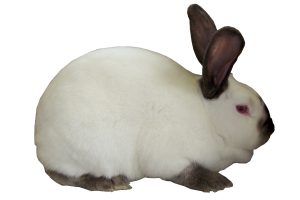 If you are going to breed, Californians make excellent mothers and are very good at raising their kits. They normally have between eight and 10 kits.

The Californian was developed by George West, who worked very hard for a long time to make the breed meet his specifications. The Californian is a product of the Himalayan and Chinchilla. Then, New Zealand whites were also bred into the program. Californians became a recognized breed in 1939.