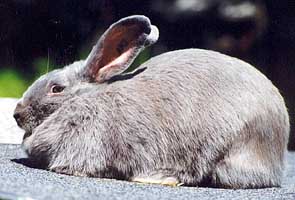 Beveren rabbits, also known as Van Beveren, are quite uncommon, which is surprising considering that they are beautiful, large rabbits that make great pets for children.

Although Beverens are not very common, they make good pets for children because they are larger than most rabbits and they can be lively. Due to their larger size, they need a larger cage than other rabbits. Beverens are also known as a meat and fur producer.

Beveren rabbits are one of the larger breeds of rabbits, weighing eight to 11 pounds for bucks and nine to 12 pounds for does. Beverens come in blue, white, black, brown and lilac. The blue Beverens are not like other blue rabbits, as they are actually a shade of lavender. There are also Pointed Beverens, with white tips on their ears and they are even more rare than regular Beverens.

Unlike other white rabbits, which have red eyes, the Beveren has blue eyes. Beverens have a mandolin body shape and they are of medium body length. Their ears should be in a “V” shape and at four and three-quarter inches on seniors and intermediates. In addition, their wool must be between one and two inches. In a show, there are three categories for Beverens: Beveren-White, Beveren-Black or Beveren-Blue. 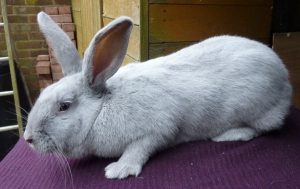 A rabbit that weighs more than its age class allows, may be bumped up to another class, but no rabbit can be in a lower age class than its actual age. Beverens originated in Beveren, Belgium in the late 19th century. Blue was their original color, which gained quick popularity.