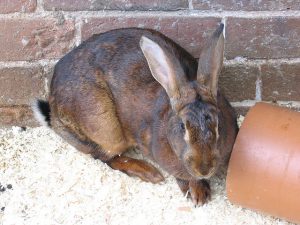 The Belgian Hare is beautiful and energetic, often called “the poor man’s racehorse.” True purebreds are quite rare in the United States and Canada, which only adds to the Belgian Hare’s allure.

Belgian Hares are very elegant, sleek and graceful. However, they are also energetic and need a large cage to run around in. Belgian Hares often become a beautifully rich, deep chestnut red color that is highly desired among fans of the breed. They move often and with grace, especially when you are near them.

They prance around, not doing the typical hop, but much more gracefully, almost like a dance. However, Belgian Hares are a very nervous breed, which makes them more susceptible to bacterial and viral diseases. They are also very difficult to breed. Although Belgian Hares are active rabbits they seem to enjoy being handled and posed. When posing them you should not lift them up by their ears but instead gently lift them from under their chin.

When they are handled a lot they tend to develop strong bonds with their owners and distinct personality traits. Belgian Hares are graceful and tall, weighing an average of eight pounds. Their body is very long, fine and sleek. Belgian hares also have long legs and ears. The most common color is a dark chestnut red with black ticking on their backs. 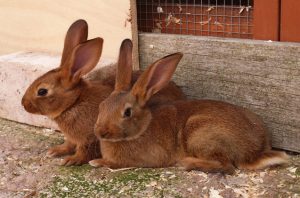 Belgian hares originated in Belgium in the early 18th century as a cross between domestic and wild European rabbits. They were selectively bred to be a beautiful and practical meat rabbit. In the mid 19th century, they were imported to England and called the “Belgian Hare.” English breeders made the Belgian Hare appear more spirited, like wild English rabbits.

The first Belgian Hare was brought to America in 1888, where it enjoyed immense popularity. In 1917, their popularity fell, mainly because too many tried to make the Belgian Hare a meat rabbit, while they are truly a race rabbit. However, today, true Belgian Hares are rare, due partly to the degree of difficulty many have had in breeding them.

Although Belgian Hares are not extremely difficult to raise, but you have to remember that they are different than other breeds of rabbits and you have to raise them as such. What works for other breeds will not work for Hares as far as housing feeding etc. They are a true challenge, and are not for everyone, but they are also very rewarding.

If you have other rabbits, you should quarantine the Belgian Hare for a week or two. This is to make sure the new rabbit doesn’t have any diseases. In addition, let them readjust, as moving can be very stressful. It is also preferable to give them ample time to develop new immunities. Ask the previous owner for a little of the feed that was used and gradually mix in the feed you use, to get your pet accustomed to the new feed. They should have a cage with at least a 24 by 48-inch floor for it to run around in and a height of 24 inches.

A breeding or brood cage should be 30 by 60 inches, at least. In addition, the floor needs to be solid, as opposed to wire, to support the Belgian Hare’s feet. The cage should have proper ventilation. Add straw, shredded paper or anything similar for the bottom of the cage. It is important for your Belgian Hare to stretch and one good way to ensure this is to have their water placed high in the cage. As with any cage, cleanliness is of utmost importance. 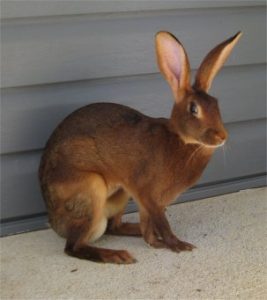 Several times a week is preferable. Also, do not just add to the bedding, but remove it and replace with new. Also, feeders and water bottles need to be cleaned and sterilized. Belgian Hares should not be kept in an environment that is hotter than 90 degrees or colder than zero degrees. They should have plenty of bedding and protection from wind and snow when it is cold. Since Belgian Hares can be very jumpy and usually don’t like sudden noise, it is a good idea to have a radio constantly playing near them, so they can get used to noise. Also, make sure not to overfeed Belgian Hares.

In order to successfully breed Belgian Hares, you must be adaptable as each doe and buck will react differently. The doe will have a 10 to 14 day cycle where she will be receptive and at this time, her vent will be dark pink and moist. Try placing her in the buck’s cage, but watch them carefully. They could fight or they could be scared of each other and hide in opposite corners of the cage. The buck will mount the doe with luck, but if not, then there isn’t a whole lot you can do. Remove the doe from the cage when the kits are eight weeks old. You can leave the kits together for about four months, or until the bucks start trying to mount the does. Then the two sexes should be separated.