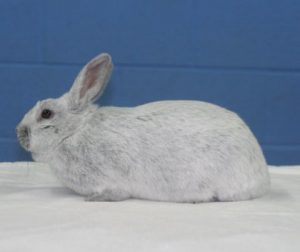 Quite different in appearance from the standard Argente Rabbit, the Argente Bleu or Blue Argente Rabbit is a gorgeous variety of one of France’s oldest and rarest rabbit breeds! Blue Argente Rabbits have both meat and fur properties, and today make stunning show animals with their incredible coats!

The Argente Bleu Rabbit will need regular and careful grooming to keep it from becoming uncomfortably matted, but with its striking appearance and docile personality, is well worth your time and energy! The Blue Argente Rabbit weighs between six and eight pounds.

Its coat is given the effect of well-worn metal by the longer blue guard hairs, which are interspersed throughout the fur. This fur is of a whitish color that has the blue tint. The shade should be very even, with sleek blue guard hairs evenly interspersed- too may or too few will ruin the lovely effect of the coat.

The Argente Bleu Rabbit’s undercolor is carried down to the skin, and is a muted lavender color. The entire coat is sleek and flat and quite striking! The head, feet, and erect ears should be the same color as the stocky, compact body. Blue Argente Rabbits have graceful backs with a slight arching curve. The hindquarters, back, and shoulders of the Blue Argente Rabbit are strong and well developed. The loins are quite broad and the neck is almost nonexistent.

Argente Bleu Rabbits also have very straight front legs with very fine bones. The standard variety of the Blue Argente Rabbit has been raised in France for more than one hundred years, where it is a fancy rabbit known as the Argente de Champagne. It was developed in the region of Champagne and thus named for that place and its color, argente or silver in French.

Specific markets for the Argente Rabbit, known long ago as “Millers”, were held, since these then-common rabbits were so popular with furriers. The Argente de Champagne Rabbit was raised for the most part by peasants, who used it for fur and meat, and the early specimens with darker heads tended to have a darker undercolor, as those with lighter heads had lighter undercolors.

The Blue Argente Rabbit is just one of several colors of Argente Rabbit, which have been developed over the years. Today it is considered a fur breed in the United Kingdom and is shown as a six-class breed. The Argente Bleu Rabbit has surprisingly become quite scarce despite its unusual appearance and sweet nature.

In show, your Blue Argente Rabbit will be marked faults for having a mandolin body type or for any hint of yellow or champagne coloration. Dewlaps are major faults in both buck and doe Argente Bleu Rabbits. Breeding Blue Argente and Argente de Champagne Rabbits has been attempted, but not always with good results, as the weight and body type difference is formidable. The color is sometimes marred as well, though a few good litters have been obtained from this cross.