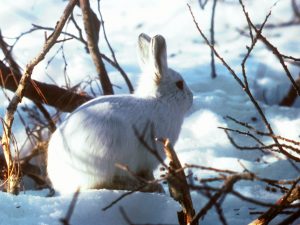 The Alaska Rabbit, a thickset, short rabbit, was bred in Germany despite its name’s suggestion! Anyone will love this German rabbit with its gorgeous coat and docile personality, despite its odd name! The Alaska Rabbit was once bred only for its fur, though today it is valued as a show animal! To keep your docile pet from becoming uncomfortably matted or ill from hair consumption, it is important to groom him regularly and carefully.

Alaska Rabbits are reputed to have strong personalities and will amuse you for hours with their antics! Your care and love will be well rewarded with a lovely, sweet Alaska Rabbit!

Growing to be six to eight pounds, the Alaska Rabbit has a very stocky body type. These rabbits are stumpy and thickset, and have almost no neck, with their broad heads carried very close to the body. Doe Alaska Rabbits have heads which are a bit finer than bucks’, and are allowed a dewlap so long as it is well developed and in proportion to their body!

Alaska Rabbits have bright, brown-black ears, held open and straight. The shoulders and rump are well muscled to compliment the broad chest, and the strong legs of Alaska Rabbits are of medium length.

The silky thick fur is the sleekest feature of the thick Alaska Rabbit, and is a jet-black color. The undercolor is slate blue with the last quarter inch of the hair tipped black, and long guard hairs are interspersed throughout the coat. Sometimes Alaska Rabbits sport an even sprinkling of isolated white hairs. 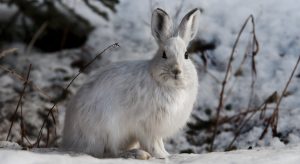 In show, your Alaska Rabbit will be marked faults for clumps of white hairs, for a body weight out of proportion with the rabbit’s size, or for light coloring in the eyes or toenails. Alaska Rabbits are shown in an L sized ring.