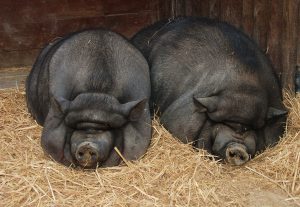 The increasingly popular Vietnamese Pot Bellied Pig has the potential to be an excellent pet, given the right amount of care and love. Some might say that man’s best friend may not be a dog but a Pot Bellied Pig!

Imported by Canadian Keith Connell and first sold in North America in 1986, the Vietnamese Pot-Bellied Pig has a history of being a prized pet among the wealthy elite. Since the 1980s the Pot Bellied Pig has become popular among people all over the world!

They are much more common than they were and their previously high prices have dropped making them more affordable for all! As babies the Vietnamese Pot-Bellied Pig is adorable! They can be held and cuddled and kept easily inside the house!

Many people are attracted to young Pot Bellied Pigs and forget that they grow to be fairly large. For this reason a Vietnamese Pot-Bellied Pig may more difficult to care for after it matures. It is recommended that both males and females be spayed or neutered at a young age; males who still have their sexual organs will emit a pungent odor, and females may be subject to mood swings when in heat and can be very difficult to deal with. 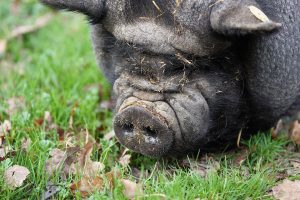 The Vietnamese Pot Bellied Pig’s rise to popularity stems, not only from its good looks but also from its loving and friendly temperament. They are intelligent animals that develop strong bonds with their owners!

Some individuals may need their canine teeth clipped; the pot-bellied pig can bite, and if the canines are not trimmed it can be very painful. Non-castrated males are the most commonly known biters. Remember that Vietnamese Pot-bellied Pigs enjoy your company, but generally do not always like to be picked up; being lifted can make them nervous.

Vietnamese Pot Bellied Pigs need plenty of fresh water and a large wallowing area, because like most other pigs, the Pot-Bellied Pig likes to roll around in mud to keep cool. You should bear this in mind as they can make a mess if let indoors covered in wet mud.

If you plan on keeping more than one Vietnamese Pot Bellied Pig, it is important to monitor their behavior together. A dominant male will almost always rise from the masses, taking whatever food you leave out and squirreling it away in a safe location so he can eat it himself. 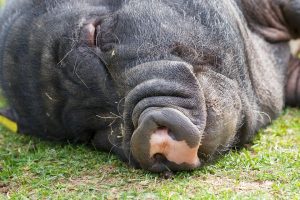 Vietnamese Pot-bellied Pigs are usually fed fruits and vegetables, dog chow, and bread or potatoes. These pigs have an advanced sense of how to communicate and will use their trademark grunting and squealing to get what they want or boss other pigs. They are very social and love human interaction and especially petting!

The Pot-bellied Pig is an intelligent animal that responds well to training. Most can be trained to use a litter box with the right amount of care and discipline. If you treat these animals well, they will provide you with a long, satisfying relationship, given that their life expectancy is 12 to 13 years if they are well cared for.

As an Adult, the Vietnamese Pot-Bellied Pig is small for a pig and averages about 150 pounds, measuring around two and a half feet long from head to tail. Individuals as small as 60 pounds have been reported and some may grow as large as 205 pounds.

They have tusks that measure up to six inches in length, and have pug-like, upturned faces that many find absolutely adorable. They have large bellies that will almost drag on the ground, hence the name. Their color is black, typically, although they are known to come in some other varieties such as spotted, but this is highly uncommon and usually the result of cross-breeding. The skin is loose and quite saggy.

Keith Connell originally imported the Vietnamese Pot-Bellied Pig into Canada in 1985, soon after they were introduced to the United States. Initially they were most commonly sold to zoos. Their cute looks and friendly dispositions make them grow increasingly popular in the pet trade. 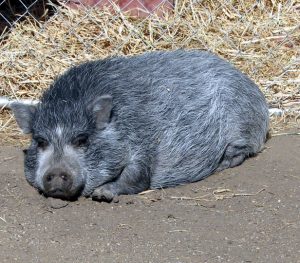 They may threaten and often bite members of the family. Over bred in some areas they are found on the streets and being destroyed in animal shelters. While they can be forced to do tricks and walk on leashes they do best when allowed to live in a more natural setting outdoors with plenty of room to roam and a warm place to sleep in the company of other pigs.

The suggested pen size should not be less than 50-feet X 150-feet. Acreage is preferred. It is not advised to house them with horses, donkeys or llamas. Their shelter must be warm and dry and draft free. Additionally it should be kept deep in straw or hay.

Shelter temperatures should not be allowed to fall below freezing. Deep all day shade should be available and they need mud or a wading pool for cooling off. It is not advised to feed scraps or dog food. Both of these can cause obesity and this can cause a variety of health problems.

Feed plenty of raw vegetables and some raw fruits daily as well. Canned vegetables can be fed if fresh are not available, but fresh is always preferred. Plenty of grazing and rooting area is required Male Vietnamese Pot-Bellied Pigs are fertile at 52 days and unless breeding is desired an experienced pig veterinarian should neuter them well before that time.

Certain peculiarities of the pbp neuter are not conducive to farm neutering and result in death frequently. Females will usually start cycling at 3 months and if they are not spayed they are much more prone to uterine cancer or other fatal female reproductive disease by the time they are 9 or 10 years of age.

Female Pot-bellied Pigs will come into estrus with the sight or scent of a male! She will generally urinate to indicate that she is in heat. The Vietnamese Pot Bellied pig will build a nest once she is pregnant by using leaves and twigs!

After becoming pregnant the female undergoes a gestation period of 112 to 115 days. Litters can range from as few as three babies to as many as twelve. Once they’re born, usually after about half a year, the babies are completely blind.

They will establish a pecking order for feeding and the dominant one will get first crack at mother’s milk when feeding time comes. The mother sow is usually on the defensive, and won’t let anyone or anything near her babies save for other female pigs like her.

The baby piglets will be very playful and run around, being very competitive with others in their litter – an attribute they will lose later on as maturity comes. The piglets will be weaned after about three months, but will not leave the mother for about a year.