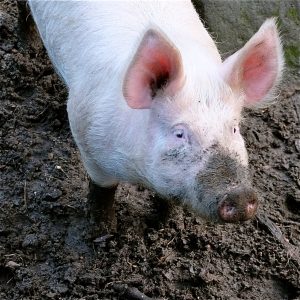 The most popular pig in Great Britain, the Large White, is known as the Yorkshire in United States and Canada. This low-cost, high-quality animal is an ideal animal for any climate. A very hardy animal, the Large White was once highly valued for its hardiness. Today, the Large White is well known because it can thrive in a variety of conditions.

The Large White is an energetic pig, a fact that helps it avoid laying down a heavy fat layer. Despite their large size, they are graceful animals. The Large White Pig can make wonderful sweet tempered pets for homes with acreage and are easy to keep. The Large White is, as the name would suggest, a large animal. The boars have longer legs than other breeds of pigs, which enable the males to mate with the females at a younger age.

Large Whites are often considered the prototypical pig, with their coarse, white coat and pink skins. Large Whites have a heavy, stocky body that they carry with grace. Their slightly concave faces are topped with small, erect ears. The exact origin of the Large White is unknown, although it is known that they were developed in Yorkshire County, England.

It is from this native land that the breed derives its common name, theYorkshire. It is believed that the large, native white breed was crossed with the Cumberland, Leicestershire, Middle and Small White breeds to create the Large White. The first written records of the Large White are from the Windsor Royal Show that was held in 1831. The Large White garnered quite a bit of enthusiasm at this show. 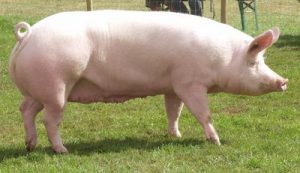 The Large White was initially bred as an animal that did not need much husbandry and was content and healthy foraging outdoors most of the time. It was first registered in 1884, the same year it was entered into the National Pig Breeders’ Association. Today, the Large White is the most popular breed in Great Britain, with almost 4,000 animals living in that country alone.

They are also among the most popular pigs in the United States and Canada, where they are known as the Yorkshire. Large White pigs are bred not only for their high-quality, low fat meat, but also because they are an excellent pig to cross with other animals to improve the line. Large White Pigs generally have very large litters and are capable of producing plenty of milk for all their young.