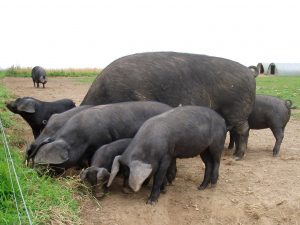 The Large Black breed is also known as the Cornwall, Devon or Lop-Eared Black. They are large, sturdy animals that are excellent producers of high quality meat. Large Blacks are well known for their prolificacy and milk production abilities, as well.

Native to England, the Large Black evolved in an environment where they had to graze and forage. They have retained these abilities and are capable of surviving anywhere there is enough grass to graze on. Because Large Blacks are so amazingly docile, they do not require a huge amount of fencing. While they should be kept indoors in cold weather, the rest of the time they do very well outside.

Because Large Blacks have very dark pigmentation in their skin, they can withstand bright sun better than other breeds. Large Black sows generally have very large litters and usually have plenty of milk. They are quite friendly. Large Blacks are growing in popularity as a meat pig, as well. Large Blacks are often crossed with other pigs to improve the milk and meat production of the animals.

Large Blacks are, as the name would suggest, both large and black. The dark pigmentation of their skin protects them from the sun. Large Blacks are very long with broad bodies, making them ideal bacon pigs. The head of the Large Black is long and topped with lop ears. 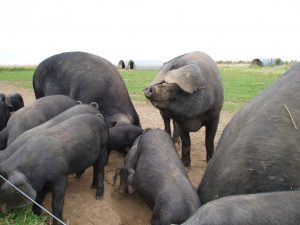 Like the Large Black’s skin, its hair is also black. The hair is fine and thick. The lop ears of the Large Black are very large. They cover a large portion of the face, including the eyes, which some specialists feel may be the cause of their unaggressive natures. Large Blacks move very slowly, probably because of a combination of their large size and obstructed vision.

The Large Black evolved from crosses of pigs, black in color, from Devon, Cornwall and East Anglia. The East Anglian pigs are thought to have evolved from Chinese pigs that were imported to England from China in the 1800s. The native breeds from Devon and Cornwall were likely mixed with French breeds.

Regardless of their origins, the three types were bred in the late 19th century and the Large Black breed was well developed by 1900. After the turn of the century, the Large Black became very popular, especially as a producer of pork. The breed society was formed in 1899.

Although the breed was quite popular in England and several importations were made into Canada in the 1920s, the Large Black never gained popularity in the United States. After World War II, the aim of pig farmers shifted from an animal that can do well outdoors with little husbandry to an animal that needs a lot of care. This resulted in the Large Black becoming nearly extinct. Today, they are one of the rarest breeds of native British pig. 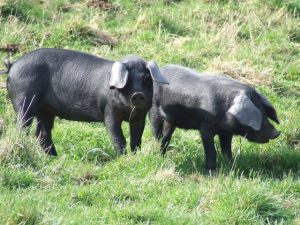 The first major importation of Large Blacks into America occurred in 1985, when Ag-World Exports imported several pigs because they thought the hardy Large Black would be an economically sound choice for the American Farmer. As in Britain, the Large Black never really caught on in the United States and remains rare there to this day.

It has been reported that the Large Black is easy care for in a free range situation with normal pig care. The Large Black is reported to breed very easy, but because they are relatively rare worldwide it is not easy to get pure Devon Pigs. They farrow easily and have an average size litter of between 8 and 10 babies and usually make excellent mothers. Piglets are reported to be faster growing than those of other breeds.