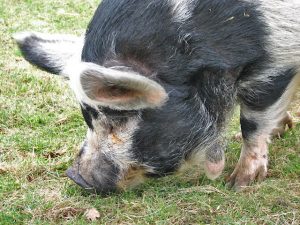 The Kunekune pig is native to New Zealand. It is a small, rare breed that is a delight to all that see it. The Kunekune is unique among pigs in that they are a grazer rather than a forager, making it an easy animal to care for. A docile, friendly animal, the Kunekune is quite affectionate. They make excellent pets and even better lawnmowers, as they subsist by grazing. The only time a Kunekune needs to have food provided for him is in winter. During cold weather, they appreciate grains.

The small, round Kunekune rarely exceeds 24 inches in length. They generally reach a maximum weight of about 260 pounds. The Kunekune appears in a variety of colors, with the most common being pure black. They can also be tortoiseshell, blue or ginger. They have short snouts with tusks. The tusks in the male Kunekunes are much larger than those of the females. The tusks generally curl upwards in a circle.

While the pig is quite gentle, people can be injured by an inadvertent movement of the pig. Kunekunes have a round, sturdy body and short legs. Their coats are quite bristly, and their ears can either stand erect or hang next to the head. One feature of the Kunekune that is different from other breeds is the presence of piri piri, or dewlaps, that hang from the mouth. The Polish Black and White pig is the only other known breed that shares this feature. 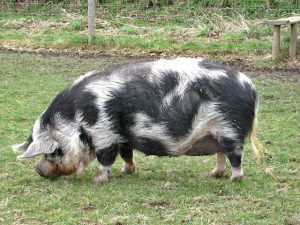 The origin of the Kunekune is unknown. In 1945, J.W. Pierson wrote that the Kunekune is related to the Old Poland breed and was developed in China. This does not explain how the pig got to New Zealand. There are several theories that explain the possible origins of the Kunekune pig. Some people believe that the Maori people carried the pigs with them when they moved from Indonesia, Asia or Melanesia to New Zealand. This theory is supported by Sir Peter Buck’s observations of Kunekune pigs in Tahiti in 950 AD. The Tahitian pigs even shared the same name.

A third theory is that two Maori men were kidnapped by the Norfolk Islanders to teach the people how to weave flax. The men who were kidnapped were a chief and a priest, and neither had any idea how to do the menial labor reserved for women. They were returned to their home in 1793, and it is believed that the Lieutenant Governor Philip Gidley King of Norfolk Island gave the tribe a gift of ten sows and two boars as an apology. The final theory, and the one most believed by scholars, is that the Kunekune developed both from Maori animals and animals brought by Captain Cook. 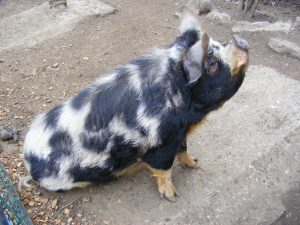 Many scholars believe he brought the pigs to New Zealand in 1763, and exchanged the pigs for food from the Maoris, however, these pigs died. Later, in 1769, De Surville from France also gave some pigs to the Maoris. These pigs did not breed successfully, either. In 1773, Captain Furneaux who was traveling with Captain Cook released a boar and two sows in New Zealand. These were likely killed by the Maori, but it is possible that they, along with pigs later released into the wild by Captain Cook, managed to breed resulting in today’s Kunekune.

Whatever the origin of the Kunekune, it is certain that until recently the Kunekune were well on the way to extinction. In 1988, only 160 purebred Kunekunes existed in the world. Fortunately, two wildlife preserves purchased as many specimens as possible in the late 1970s and have worked to repopulate New Zealand. The New Zealand Kune Kune Association was founded in 1989 to work to preserve the breed.