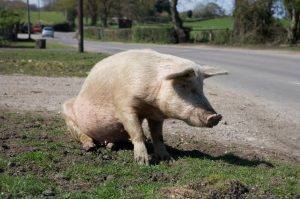 The Hampshire Hog is one of the oldest breeds of American hogs that still exist today. They are common in many parts of the world. It is interesting to note that while they were originally bred in the US, they are now an established British breed. A docile animal, the Hampshire pig is easy to handle despite its large size. They are very energetic and hardy and do well in almost any type of environment. They are able foragers.

The black and white Hampshire Hog is a rather large animal. They are usually black with a white belt around the middle of their body. Hampshire’s have erect ears and strong legs and feet.
The name Hampshire was given to this breed in 1904, although the breed has existed since between 1825 and 1835. They were known by so many different names, including McGee Hog, Saddleback, McKay and Ring Middle, that it was decided that they needed a standard name.

The name comes from the area of England that researchers believe the original stock came from, Hampshire County. It is thought that Old English pigs were brought to America from Hampshire between 1825 and 1835. The first breeders’ association, known as the American Thin Rind Association, was found in Kentucky in 1893. In 1904, the name of the association was changed to the American Hampshire Record Association.

The Hampshire does well on a diet of 6 to 8 pounds of high quality pig finisher daily, plus several acres good pasture and woods. They should have shelter that is dry, well bedded with hay or straw and out of the wind. They will require heat in subzero temps, and should be given access to shade. Additionally because pigs don’t sweat, they should be given mud in which to cool themselves when they are warm. The Hampshire is known for its prolificacy. They generally have large, healthy litters.