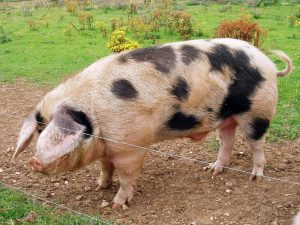 A large animal, the Gloucestershire Spot is one of the few large breeds of pig found in England. They are generally white with black spots. Once known as the “Orchard Pig” because of their tendency to forage for food among the castoffs in the orchard, the Gloucestershire Old Spot has been in existence for over a hundred years. It finds its origin in the Berkley Vale in Gloucestershire, England, where it was bred in the 1800s. 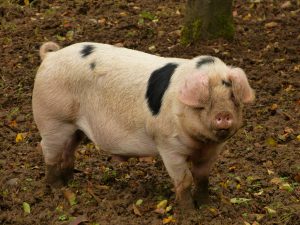 They were likely bred from the Cumberland, Lincolnshire Curly Coat, and a native breed that was described by Youatt and Martin in 1855 as having an unattractive dirty white coat. Although the Gloucestershire breed never became very popular, there were enough aficionados of the breed in 1913 that the Gloucestershire Old Spots Breed Society was formed. The Gloucester decreased in numbers rapidly to World War II, because at this time pig breeders were more interested in production than in a hardy outdoors pig. By the 1960s, they were almost extinct. Fortunately, since the early 1990s, varieties of organizations have been working to revive the breed. The Livestock Breeds Conservancy sponsored the importation of twenty Gloucester piglets to Kelmscott Farm Foundation in Maine in 1995.