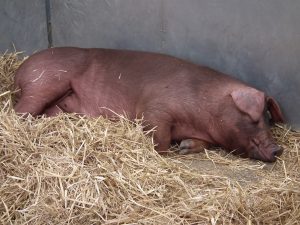 The Duroc breed of pig, sometimes known as the “Duroc-Jersey” is one of the most popular breeds of pig in the world. The popularity of the Duroc can be attributed to their large size and high quality meat production A lean pig, the Duroc is known for its high quality, low-fat meat. They grow very quickly and can do well on minimum feed.

The Duroc is well known for its sturdiness, stamina, and sheer power. Duroc boars are often used as a terminal sire. The Duroc is a large, powerful animal. Boars average 120cm at the withers, and sows about 110cm. The average slaughter hog weighs 250 pounds and normal mature sows weigh between 325 and 350 pounds while boars usually weigh between 350 and 400 pounds. Durocs can appear in a variety of colors. They range from very light yellow to mahogany red. They are usually solid colored. Durocs have drooping ears and a medium-length face.

The Duroc breed was developed in both the United States and Great Britain. It is believed they came from red hogs that were imported to America by Columbus on his second voyage to the New World. These original red hogs are thought to have come from Spain and Portugal. They also may have derived from red pigs that were imported from Spain by Henry Clay in 1837 or by Daniel Webster in 1852. 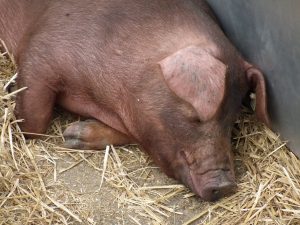 Sometime before 1850, a breed of pig known as the Jersey Red was developed in New Jersey. These pigs were very coarse and rangy. These animals were crossed with a strain of pigs from New Jersey that was developed by Isaac Frink. The pigs were named “Duroc” in honor of the Thoroughbred Stallion of the same name that Frink saw on the same day he purchased the red pigs he later developed.

The Durocs were much smaller than the Jersey Reds. Frink’s animals were crossed with some red pigs from Connecticut around 1830 by a man named William Ensign. By 1877, the various breeds of red pigs in New Jersey, New York and Connecticut had been combined into one stable breed that was originally known as the Duroc-Jersey. In the mid 19th century, Durocs were imported from the United States and Canada into Great Britain, where they were crossed with native animals and pigs from Denmark.