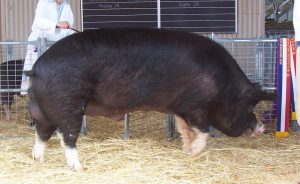 The Berkshire breed of pig is a moderately sized breed native to England. They are known for the quality of their meat. Primarily used for meat and as a crossing breed, the Berkshire Hog will, when crossed with a white breed, produce white piglets. They are very hardy animals and produce high quality, lean meat. They grow very quickly. The sows produce plenty of milk for their young, resulting in heavy, healthy babies.

Feeding the young does not cause any problems in the health of the sow. Berkshire Hogs can do well in almost any environment. They are very hardy animals and can prosper in extreme temperatures. They are docile animals and do well in groups.

The Berkshire Hog can reach up to 50kg or 110 pounds in weight. They are usually entirely black, although when crossed with a white breed the progeny is nearly always white. They usually have white markings on their face, tail and feet. Their ears are held erect.

It is believed that the army of Oliver Cromwell discovered the Berkshire Hog while wintering in Reading over 300 years ago. The soldiers told the people of England about those hogs when the war was over, which is what likely caused the Reading Fair to be so well known for pork products. The basic Berkshire stock was mixed Siamese and Chinese pigs, resulting in the primarily black hog seen today. 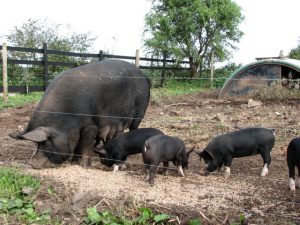 This mixing occurred 200 years ago and the breed has remained pure to this day. The high quality meat produced by the Berkshire Hog made it a highly valued animal by the wealthier farmers of England, including the royal family. In 1841, a hog named after his home, “Windsor Castle,” was imported to the United States. This animal was well known for his size.

The first Berkshires were imported to the United States in 1823 and were valued for the improvements they made by crossing these hogs with native stock. On February 25, 1875, the American Berkshire Association was founded. The group’s goal was to keep the breed pure.

Queen Victoria’s boar, Ace of Spades, was the first hog registered by the Association. To maintain the purity of the breed, it was decided that only those hogs who were imported directly from England or who could trace their ancestry back to English animals could be registered. Since the time of the Association’s establishment, the Berkshire has been famous for its performance at market hog shows.