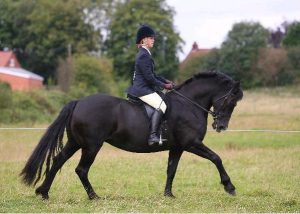 This sturdy little pony is also becoming more popular in the show ring as well as in various competitive events, including dressage. Welsh Cobs have very good and willing dispositions, and can be used in many ways.

The Cobs excel at dressage, all types of driving, endurance riding, and in Western and English pleasure classes; Cobs are also shown in hunter classes and are ridden as field hunters; they are also used herding cattle and have been found in pulling events.

The Cob is a wonderful cross with Thoroughbred horses, Arabians and Quarter Horses to improve bone and hardiness. There are four sections or categories of Welsh Ponies and Cobs. Section A is the original Welsh Mountain Pony and is the smallest of all the sections.

Valued for its’ beauty, hardiness and is recognized as the genetic basis for all other registered Welsh – wonderful as a child’s first pony and great for adults interested in driving.

Section B is the Welsh pony most often seen in the USA- a riding type pony and larger than the Section A but never more than 14.2 hands. Wonderful for children. Section D is the Welsh Cob over 13.2 in size with no upper limit: it is never referred to as a Welsh Cob Pony!

It has great bone and magnificent movement suitable for dressage and hunting. It is capable of carrying full sized riders. Section C is similar in type to the Welsh Cob but is always 13.2 hands or smaller.

It is properly called a Welsh Pony of Cob Type and is relatively rare in the USA. Excellent for driving competitions; it is also a fine mount for small adults interested in hunting, dressage and combined eventing.

The Welsh Cob can be any color, but both skewbald and piebald are not allowed. This horse has a long neck, cute, well-placed ears and large eyes. With muscular hind and fore legs, the Welsh Cob is very powerful.

When Henry Tudor gained the English throne in 1485, it was the Welsh Cob that assisted his militia to make it possible. Until the middle of the twentieth century, the Welsh Cob was used by the British government to pull heavy machines and weapons in times of war.

The Welsh Cob was also highly prized as mounts for those who had to cover great distances, such as doctors or businessmen.