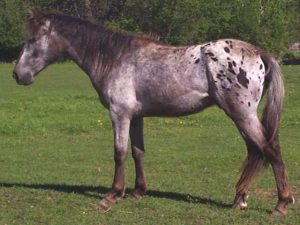 Walkaloosas are a variety of Appaloosa sometimes known as the Gaited Appaloosa. These horses are valued for their pace known as the “Indian Shuffle” or “Appaloosa Shuffle”, which give riders and cargo a smooth, gliding ride!

It is said that Nez Perce Native Americans valued the Walkaloosa because of this pace, which could help to transport the valuables of this semi-nomadic people with a minimum of disruption.

The “broken” gait occurs when one foot hits the ground slightly ahead of the other, making the shock of the impact absorb through different parts of the horse’s body. In appearance, the gait makes the Walkaloosa seem as though it is simply rolling its shoulders and hindquarters in circles to create a forward motion!

In temperament, Walkaloosas are willing to do almost anything asked of them with a good-natured attitude. They are gentle and patient, and make a great beginners’ horse.
The Walkaloosa stands between 13 and 17 hands, although the average falls between 14 and 15 hands.

They weigh between 600 and 1,300 pounds and their builds range from very refined to stout! Walkaloosas have broad heads with wide-set eyes. Around their eyes and lips, the skin coloring is mottled.

Muzzles are clean and not Roman shaped or coarse. Their legs are long and straight with flat bones. The hard hooves are striped. Though the back is relatively short, it is strong! A variety of striking patterns are acceptable.

Most commonly found are Leopard, Roan, Snowflake or Blanketed patterns. Walkaloosas have very strong shoulders and with a well muscled, moderately wide chest. Their withers are well defined but are not too prominent. The only trait defining a Walkaloosa from a typical Appaloosa is its gait.

In show, gaited Appaloosa will be disqualified, as they are required to exhibit a clean walk, trot and canter. Gaited Appaloosas will perform the famous shuffle. Walkaloosas are shown in gaited horse competitions but not widely.

They are mainly valued by their owners for their comfortable ride and are used for pleasure, pack and trail riding. They are valuable cattle horses, and at a time when the average horse cost two dollars, cowboys would pay 50 dollars for a Gaited Appaloosa’s easy ride.

Gaited Appaloosas are descendants of the Spanish explorers’ Paso Fino horses, who were refined into Appaloosas by Native American tribes like the Nez Perce. Today, Walkaloosas are recognized as separate from Appaloosas, but do not have a wide following; the breed association was formed in 1983.

Thirdly, your Walkaloosa may be registered if it is the offspring of an Appaloosa and a gaited horse like a Tennessee Walker, a Paso Fino, or a Foxtrotter. Although Walkaloosas are not widely bred, it is not difficult to produce a Walkaloosa.

In fact, they crop up quite by accident in Appaloosa ranches! And, because the gaited trait is dominant, all the offspring of a Walkaloosa are sure to have the lovely smooth pace.