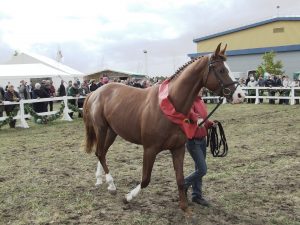 The Trakehner is a fairly large Warmblood horse developed in East Prussia. It is very intelligent, docile and willing to please. They have a natural elegance and grace, making them excellent competitors. They are also great jumpers.

The elegance and grace associated with the Trakehner makes it a natural competitor in such fields as dressage. Its movement is very graceful, with a light “floating trot” and soft canter. They are also excellent jumpers.

Trakehners are very well known because of their temperament, which is alert and intelligent but also very stable, docile and hard working. The Trakehner is reported to grow even more gentle as they age.

This breed really seems to love people and is eager to please, making him very trainable. While they originated in Prussia, today they are primarily bred in Germany. The Trakehner is quite large and exceptionally handsome.

They average between 16 and 17 hands with rather large bones. Despite their size, they are still quite elegant in appearance. They have a deep, sloping should and a fairly long back, which makes their graceful movements possible.

Their excellent jumping skills are made incarnate because of their powerful hindquarters and muscular stature. In 1732, the Trakehner breed was developed at the stud farm in Trakehnen, East Prussia.

The original foundation stock of the Trakehner was made up of stocky, strong native horses. These horses were a bit small and unrefined, which the breeders attempted to improve.

The major breakthrough came in the early 19th century, when small quantities of Thoroughbred and Arabian blood were introduced to the breed. This succeeded in making a larger, more refined horse. 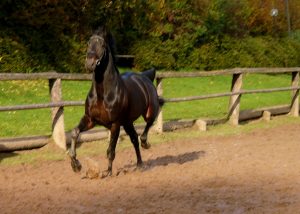 It also succeeded in creating a horse with better endurance. The main goal was to create a large, strong horse that could be used not only as a riding mount during wartime but also as a working horse during times of peace. During World War II, most Trakehners were forced from East Prussia.

Since that time, most of the breeding has been done in what was once West Germany. They were not introduced to North America until the late 1950s, when several horses were imported into Canada and then to the United States.