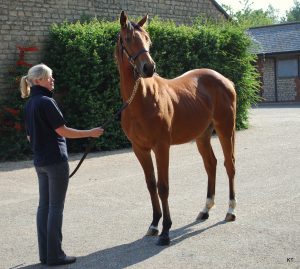 The Tiger Horse, contrary to its name, neither looks nor acts like a tiger. However, they are very colorful and are desired by many as show horses, due to their gait, which is comfortable for the rider. They also have a long history, including an important role in the military.

The Tiger Horse is famous for its four beat gait, which is one of the most comfortable gaits for a human rider, due to the minimal vertical movement of the horse. Their ability to effortlessly perform this gait has made them one of the most popular riding horses available.

Tiger Horses are also kind, loyal, and strong. They are loved for being superior, beautiful, hardworking and are a great travel horse. Although their name gives them an impression of stripes, the Tiger Horse has no stripes. They also have rear left and right stockings. At maturity, the Tiger Horse stands roughly 15 hands tall.

Drawings of the horses can be found in prehistoric caves, made by prehistoric men over 30,000 years ago. The Spanish Jannet evolved from these prehistoric horses. The Jannet is the relative of the Tiger Horse.

The Tiger Horse got its name from the Spanish, who called it the Caballo Tigre. Throughout their evolution, this horse had played an important role for mankind. Many conquerors have conquered new lands on the Tiger Horse.

During the colonization of the New World, the Tiger Horse was becoming less popular due to the English Thoroughbred. Many were brought to Canada, where they received a warm and loving welcome from the Native Americans. The Ni Mee Poo was one of the major tribes to breed and perpetuate this newly introduced horse.

The Ni Mee Poo bought the horses from the Canadian and Russian Traders. The Ni Mee Poo kept large herds of the Tiger Horse, until the American Army conquered and relocated the tribe in 1877.

This unnatural intrusion caused the large herds of Tiger Horses to become dispersed. The pure breed line then faltered. However, in 1938, an Oregon farmer named Claude Thompson began a registry for the Tiger Horse and other spotted horses.