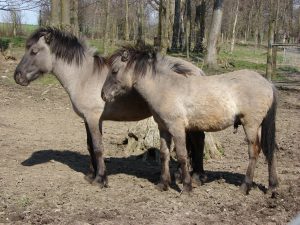 The Tarpan is an extinct horse, but through the modern miracles of genetic technology has been brought back from extinction. The Tarpan is presently considered to be the ancestor of every lightly built horse breed.

Tarpans are very calm and have a gentle disposition. They are known to their owners as curious, friendly, quite affectionate, and very intelligent. Their calmness is perfectly suited for small children and they have been successful with handicapped riders.

They are also known to be independent and stubborn. Tarpans are not easily domesticated, and do not like to give up their freedom. While Tarpans enjoy riding and puling carts, they don’t like being told where to go, or what to do. It takes a great deal of patience to tame and command a Tarpan.

Tarpans are small, lightly built horses. At maturity, the Tarpan will reach a height of roughly 13 hands. Their bodies are dun or grulla in color, with a smoky gray body and a dark head and legs.

The mane and tail are dark in the center, with lighter colors on the outer edges, and are semi-erect. Tarpans have large head with large jaws and a thick neck. Their back is short, strong, and has low withers. Tarpans due not need shoes due to their extremely tough hooves.

Tarpans are wild horses dating back to prehistoric times. Some scientists believe they are the ancestors of the Arabian horses. Nomads in Southern Russian tamed this horse around 3000 B.C.

The last wild Tarpan died while attempting to avoid being captured, in 1879. The last captive Tarpan died in a Munich zoo, in 1887. However, brothers Heinz and Lutz Heck managed to breed a Tarpan using the genetic information of living horses who showed similar characteristics to the Tarpan.

That first successful creature was a colt, born on May 22, 1933 in Munich, Germany. Today there are roughly 100 Tarpan living in the world. All of todays North American Tarpans can be traced back to 6 animals exported from Germany.

There is an effort to breed the Tarpan, and bring them back to their original numbers. It has been reported that the Tarpan was used to help create the Canadian Rustic Pony.