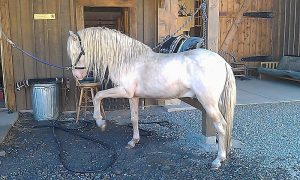 The Spanish Barb is a popular horse. They are best known for the part they played in aiding the Spanish in conquering the New World, and adapting to the new environment. They are prized for their soft gentle ride.

The Spanish Barb has great strength and lots of spirit. It is said that not only does the horse have the physical attributes to accomplish anything, but the will to do it as well. They make great warhorses, due to their spirit and alertness.

Spanish Barbs are highly trainable, tractable, and love to please their riders. They excel in endurance, are sure-footed and are, therefore, excellent for working ranches. Spanish Barbs are a medium sized horse, reaching a mature height of 13 to 15 hands.

An average Spanish Barb will weight roughly 850 to 950 pounds. Spanish Barbs reach maturity at the age of seven to nine years. The Spanish Barb has low and wide eyes, large nostrils for plenty of air intake and small ears.

Their neck is medium in length and very muscular. The Spanish Barb has a short back, with only five lumbar vertebrae, and only 15 or 16 ribs. Having large, extremely durable hooves, the Spanish Barb needs shoes in only the most extreme situations.

Spanish Barbs have a great history, tracing back to 2000 B.C. Over their history, their primary role was a warhorse. In the sixteenth century, the Spanish Conquistadors brought the Spanish Barb to America to help in their conquest, and indeed played a vital role, not only in battle, but also for transportation services.

In the American Southwest, they were the favored horse of the early Spanish and Mexican cowboys and the predecessor of the American Quarter Horse. Today small breeding populations are kept active by a few dedicated ranchers.

Not until 1972 with the formation of the Spanish Barb Breeders Association, were records kept. After this registry was established, critical standards and inspections were instituted, insuring the purity of the breed, which had almost become extinct due to careless cross-breeding.