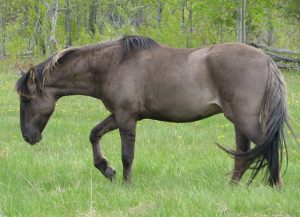 The Sorraia is well known for being able to survive in places with extreme climate, especially hot and dry climates. They can survive in good health on very little food. The Sorraia is very hardy and agile.

However, the Sorraia has little history of a domestic horse. In the past, it was used for riding and herding of fighting bulls and other livestock. The Sorraia is a beautiful horse. Due to its small size, it is often mistaken as a pony.

At maturity, the Sorraia will grow between 14 and 15 hands. The Sorraia comes in two colors, either dun or grullo (donkey-colored). They have a dark face, black dorsal stripe and black tipped ears.

They sometimes have zebra stripes on their legs or shoulders. Their main and tail are dark black with shades of white. Foals are born with stripes all over. Sorraia have a narrow, convex shaped head, with high, wide eyes, long ears and a long neck.

The back is medium in length, and is straight. Their chest is deep and narrow, with long shoulders. The Sorraia have long, well-defined legs with hooves that are hard and dark.
Prehistoric cave paintings of the Sorraia have been found in Iberia, which suggest the breed is extremely old.

The Spanish Conquistadors brought the Sorraia to South America, where it has mixed with American breeds, leading mainly to the Spanish Mustang where DNA tests show identifying markers to the original Sorraias.

Discovered in 1920 by a Portuguese scientist, Dr. Ruy Andrade, this horse was named for the nearby River Sorraia in Prtugal. Andrade took the last remaining 7 mares and 4 stallions to his ranch, where he let them breed naturally.

Most breeding of this horse today is still done by members of the Andrade family. In present times, there are only a few Sorraia left, kept in groups in Portugal and Germany.