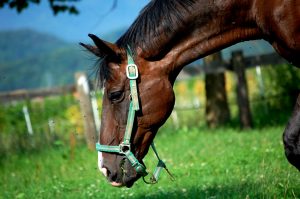 The Selle Francais, or Cheval de Selle, is a large animal most commonly used as a sport horse. They are very powerful and independent and are excellent in competition, hunting or as a pleasure mount.

Very intelligent, the Selle Francais has a mind of its own which can be seen in its demeanor. However, while independent, they are also kind animals. They enjoy working hard and generally have a very sweet temperament around children.

If trained correctly, they are usually obedient, gentle and easy to handle. Selle Francais’ usually make great hunters, jumpers, eventers and dressage horses. They are easy to train for a saddle.

With an average height of 16.2 to 17.3 hands, the Selle Francais is a rather large animal. They do not mature fully until about six years of age. They have a neat head on a long neck. The Selle Francais’s chest is deep and they have a long a muscular body.

The Selle Francais was bred near the stud farms of Saint Lo and Le Pin in Normandy during the 19th century. The breeders imported Thoroughbreds and Norfolk Trotters, which they crossed with the native breeds.

Two types of horses resulted from the cross: the French Trotter, a fast harness horse, and the Anglo-Norman, which had both a saddle and a draft horse. The saddle type of the Anglo-Norman is what developed into today’s Selle Francais.

Along with the Anglo-Norman, local French breeds including Vendeen, Charollais, Limousin, Corlais, Angonin, Angevin and Charentais were introduced to produce the Selle Francais.

Breeding began in earnest after World War II, when the French wanted to produce a riding horse blessed with speed, stamina and ability. The Anglo-Norman was crossed with the breeds mentioned above, and the resultant type was named “le cheval de Selle Francais” in 1958.

Today, the Selle Francais has achieved in all the skills its breeders desired it to have. They are athletic, strong, attractive and intelligent. The Selle Francais has been very successful in show jumping and are registered to race as AQPSA (autres que pur sang association), meaning “other than Thoroughbred.”