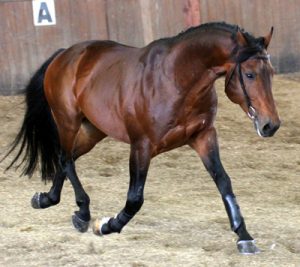 The Salernitano, or Salerno, is a rather large animal that finds its origins in Sicily. They are athletic animals known for their jumping capabilities and their ability to withstand very hot temperatures. They are ideal animals for many equestrian sports.

With a calm, sensible temperament, the Salernitano is a breed of horse that is kind and easy-going yet still high-spirited and energetic. They are very athletic animals with good movement, especially known for their jumping abilities.

They also have fairly high endurance, especially for working in hot temperatures. Their tolerance for hot weather comes from their adaptation to their native home, which is in the Mediterranean region.

Salernitanos are traditionally used as a riding horse, both for pleasure and as a cavalry mount. While untested in the field of dressage, because of their trainability and good movement they could be very successful. They are very successful in jumping events and are judged among the best jumpers in the world.

Besides being an excellent mount and sporting horse, the Salernitano is an attractive animal. They have a good depth of shoulder and well-formed legs with good joints and bones that are appreciated by aficionados.

The Salernitano is a rather large animal, standing between 16 and 17 hands tall. Salernitanos have fairly good conformation, which is becoming better as the breed becomes more refined.

A Salernitano’s head is usually quite light with a straight profile, square forehead, and flared nostrils. They have eyes that express the horse’s energy. The neck of a Salernitano is long with a muscular, pronounced muscular.

The croup is also very muscular. It has a well-proportioned back and short loins. Common coat colors for Salernitanos include bay, chestnut, black and gray. Bred in Sicily and other parts of Italy, the Salernitano comes from a land where sports are much appreciated and revered.

Because of this, anything that has to do with the equestrian sports is very popular. This athletic mindset of the people is reflected in the verve with which they pursue horse breeding, seeking to establish the best, most athletic breeds possible.

The Salernitano is one of these breeds. It first evolved at a stud in Persano, in Southern Italy, that was founded by King Charles III in 1763. The Salernitano was originally bred as a cavalry mount and was the official horse of the Italian army until 1947.

Because the Italian army also encouraged competitive equestrianism, they made the cavalry mounts available to its soldiers, an act which increased the Salernitano’s popularity as a sporting horse.

The Italian military had an equestrian jumping team, mounted primarily on Salernitanos, which was considered one of the best team in the world from the end of World War II until the 1970s.

The Salernitano was bred from Neapolitans, a breed with Spanish and Oriental blood. While the breed was repressed during the unification of Italy, in the 20th century it is being revived and is gradually becoming more popular.

Thoroughbred blood has been introduced to the line beginning in the early 20th century, an act that has greatly increased the quality of the breed.