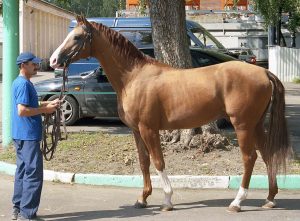 The Russian Don is a fairly large animal best known as the mount of the Cossack Cavalry in the former Soviet Union. They are rugged, strong animals with very high endurance. Russian Don’s are well known in their capacity as an endurance racer.

In a land where the summers are very hot and the winters equally cold, it is necessary for all native life to be sturdy and rugged. The Russian Don’s native home is on the Don Steppe, an area in Southern Russia that has just the qualities mentioned above.

This difficult climate had its high points, however. For example, autumn rains would force the steppe to yield rich grasses that could remain green under a thick layer of snow. These grasses provided a diet for the Russian Don in even the coldest of weather.

In more modern times, The Don has been highly valued for a variety of reasons. They are a very resilient, durable breed, the result of centuries on the steppes, and are not only very powerful animals but also have extremely good endurance.

The Russian Don is well respected as a riding horse, a military mount, and an endurance racer. Despite its large size, the Russian Don is very economical to keep because of their efficient use of food and willingness to work.

Because they spent innumerable winters traveling the steppes in herds with no shelter and little food, most Russian Dons are very sturdy. Although it is an excellent hunter, especially in wolf hunting, the Russian Don is a very even-tempered, loyal animal.

A moderately large animal, the Russian Don stands between 15.1 and 16 hands high. They have a refined head with large nostrils and eyes that express its emotions. The Russian Don’s nose can be either straight or hooked.

The neck is quite often straight and is usually lean. This breed does not have prominent withers and it has straight shoulders, giving it a short stride. It is a powerful animal, with a substantial chest and long back. The Russian Don is seen in chestnut, bay and black.

Originally a small horse living in the wild on the Russian steppes of the Don and Volga rivers, today’s Russian Don stems from centuries of breeding. The Russian Don is a very old breed even for a domesticated animal: the Cossacks settled on the Don River in the 14th century, first escaping from serfdom and then defending the Crown against nomads attacking Russia’s steppes.

These Cossacks domesticated the Russian Dons because they needed the animals for transportation, hunting and as war mounts. The Russian Don as we know it today evolved from breeding the wild horses of the steppes with horses brought back from raids, mostly horses of Oriental origin such as the Karabakh, Turkmenian and Persian.

This produced a rangy, moderately sized animal that possessed the endurance of the steppe animals and the vitality of the Oriental breeds. Over the centuries, the breed was improved by adding Orlov and Orlov-Rostopchin blood, and later that of Thoroughbreds.

The Europeans did not learn about the Russian Don until after Suvurov’s campaigns. When Napoleon invaded Russia, the Don-mounted Cossacks were instrumental to the destruction of the campaign.

The Russian Don became well known internationally in 1951, when a Russian Don stallion by the name of Zenith won an endurance race, covering 311.6 kilometers in 24 hours.

More recently, the Russian Don has gained renowned both as a saddle horse and as a harness horse, especially in the tradition “Tachanka” harness that hitches four horses side-by-side.