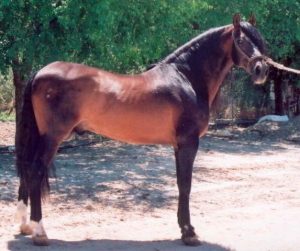 It has been reported that some individuals will just lie down when they are placed under the saddle for the first time because they do not know what to do, and do not wish to hurt their rider.

At the same time it has also been reported that some horses that were either not allowed to bond or that had hard handed owners turn very violent. Proper bonding and training is very important with this breed.

This breed is usually an excellent choice for a child or beginner to learn on, or to try to break their first horse. On the other hand they are so athletic that when they turn that same beginner may not be able to stay seated on the horse.

They must teach the horse to move slower, not turn so sharply. The Ranchero Stock Horse was originally used in Spain as a warhorse and for work with cattle. When they came to the new world they continued to be used with cattle, bison and now classical dressage.

They also make excellent jumpers. They have a lot of bottom and would also make fine endurance mounts. According to the American Stock Horse Association’s breed standard the Ranchero Stock Horse should stand between 14.2 and 15 hands tall at maturity, with an average weight of between 900 and 1500 pounds.

The colors range from 85% dun-factor, with Zebra dun, and clay bank being the most prominent. Grulla’s pop up is seen on occasion. Bays, seal brown, and liver also appear. White is allowed. A star is common, blazes are almost never found.

A “thumb print” being the color of the horse but a shade lighter is also found on about 50% of the stock. The Colonial Spanish Horse has been with us since the Spanish conquered the New World.

Since that time many changes have occurred within the fine Andalusians and other Spanish breeds brought with them. The once fine Spanish warhorse became a lesser horse by some standards after running loose on the North American continent.

Many registries sprung up trying to preserve what the horse had become, then claiming those horses to be what the Spanish had brought to the new world without change. It is the opinion of the Ranchero Stock Horse association (RSHA) that 500 yrs did change the horse.

Ships records state that the horse brought to the new world stood 15 hands, had broad backs and appeared much as the Andalusian and Lusitano of that day. It is the opinion of the RSHA that the Colonial Spanish horse of today is no more Spanish than an Mexican whose ancestors were native Indians who were conquered by the Spanish conquistadors.

These horses do, however hold a strong Iberian resemblance and blood type in high percentages to the New World Iberian groups. In 1989 Ron Roubidoux worked with Dr. Phil Spondenburg from the University of Virginia and Dr. Guss Cothran with the University of Kentucky to evaluate a group of horses he felt was historically correct and genetically pure.

In 1994 Ron sold a stallion, Wakara’s gold and a mare Little Miss Wrangler to One Sky Ranch. Two years later he the remaining mares of value that he owned to sold One Sky Ranch.

One Sky Ranch had already spent years researching the Colonial Spanish horse. They gathered them from all over the United States, buying then selling, when the mares and horses did not produce offspring, or were found to be of inferior temperament.

In 1994 when Ron sold One Sky Ranch the stallion he solved the problem. These horses were what One Sky Ranch had been looking for. At this point there were no selective breeding programs for the Colonial Spanish horse.

It was with Ron’s suggestion and blessing to take this group of horses away from the “Spanish Mustang” group and continue selectively breeding them for the traits they were originally intended.

One Sky Ranch agreed and with the efforts and support of a few other breeders, trainers and showmen, One Sky Ranch started the Ranchero Stock Horse Association. The horses today are a combination of Green River Book Cliff, Grand Valley Book Cliff, and North End Sulphur herds.

They are selectively breed for confirmation, phenotype, temperament, athletic ability, courage, and the ability to work cattle. The Ranchero Stock Horse is relatively easy to care for.

The Ranchero Stock Horse Association recommends no vaccines except Tetanus; this includes the West Nile Virus, as these horses seem to be immune to this disease as they are to EIA. (coggins) Shoeing is also not recommended, as the horses simply do not need it.

They can usually travel over rocky country with no ill effects for their entire lifetime.
As far as feeding, grain is recommended in limited amounts. They are very easy keepers and grain causes them to founder, and have digestive problems as well as become overly hyper.

The Ranchero Stock Horse is usually quite easy to breed. They have very light birth weights with rapid growth. Stallions are often fertile at one year old.