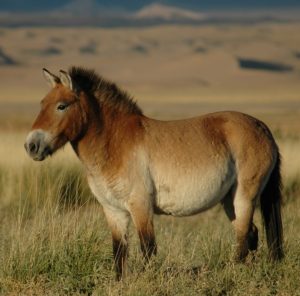 Przewalski’s Wild Horse, also known as Asiatic Wild Horse, Mongolian Wild Horse, and Taki, is one of the few equine beasts that has never been domesticated by man. Although they are sometimes hunted for meat, they remain untouched by humans, retaining all of their wild, most primitive behaviors.

Herbivores, Przewalski’s Wild Horses feed primarily on grass, plants and fruit although when food is scarce they may eat bark, leaves and bud. In zoos, they are usually fed alfalfa, grain and hay. They are herd animals, in a herd consisting usually of one male who is the leader and several females. 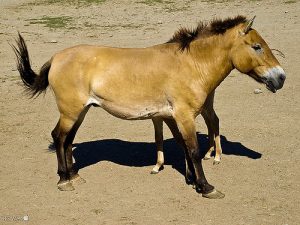 The dominant male often drives younger or weaker males out of the herd, where they wander until they found a herd of their own. A very cautious animal, Przewalski’s Wild Horse can smell and hear approaching enemies from a great distance.

When threatened, they sound a thrill cry, both to scare off the enemy and to warn other members of its herd. Przewalski’s Wild Horse lives primarily on the deserts and plains of Mongolia, although they may also live in the mountains in elevations reaching eight thousand feet.

Smaller than many domesticated breeds, Przewalski’s Wild Horse stands about seven feet from the top of its head to the floor. They usually weigh between 200 and 300kg. They have short legs and neck and a stocky build. Their massive head and stocky body gives them a pony-like appearance. 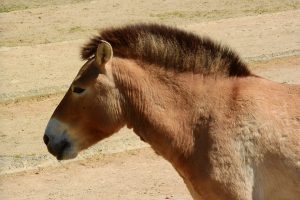 They have sharp upper and lower incisors that they use for cutting vegetation. Its eyes are set fairly far back in its skull, making it able to see a wide range. Przewalski’s Wild Horse’s ears are fairly long and erect, and can be moved to determine where a sound is coming from.

They have a coarse, erect black mane that runs down the back. In the summer, the coat is a reddish-brown color, yellowish on the belly, and short. In the winter, the coat becomes longer and changes to a paler brown color.

Przewalski’s Wild Horse is, most likely, a descendent of the same primitive breed that appear in paintings on cave walls. These animals existed 20,000 years ago. However, when men began using agriculture many of the wild herds were rounded up and domesticated. 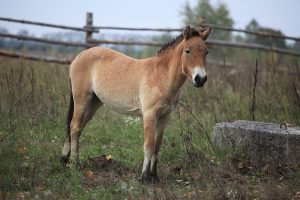 By the 19th century, almost all of the wild herds had been captured or destroyed. There was great controversy whether the herds that roamed in Poland and Russia were truly wild, or if they were herds of domestic animals that had escaped and become feral.

While they discussed, the herds slowly became extinct. In fact, they were not even included in Linnaeus classification of living things, ‘system naturae,’ which was published in the 18th century. Because these horses were extinct, it seemed miraculous when Colonel Nikolai Przewalski returned from trips into Asia ordered by the Czar with the news that he had seen herds of wild horses living in Mongolia.

When he returned from Mongolia a second time, he brought with him the skull and the hide of a horse. Because it is traditional for the name of the discover to be included in the name of the horse, the horse was named “Przewalski’s Horse.”

banglore dating appPrzewalski officially described the animal, in appearance, habitat and characteristics, in 1881. Many people tried in vain to capture and tame the animals. However, nobody was able to capture an adult animal. Instead, they tried to capture the foals.

In 1898, two foals were caught and the captors tried to rear them on goat’s milk. Both foals soon died. Przewalski’s Wild Horse is the only horse known that has never been domesticated. They are very rare, with only about 200 existing today, mainly in zoos.

This breed has not been seen in the wild since 1968, probably because the few remaining members bred with semi-wild domestic animals, making the type far less refined. Przewalski’s Horse Global Conservation Plan exists, and has tried to reintroduce zoo-bred members of the breed into the wild.

https://livestockpedia.com/best-dating-app-for-trans-woman/There is currently no special care information in our databases for this animal. To submit care information that is specific to this animal please click here. Przewalski’s Wild Horse has a gestation period of between eleven and twelve months.

They give birth to one foal, usually in April or May that is able to walk one hour after birth. They are able to graze only a few weeks after birth, but are not weaned until eight to thirteen months after birth. Mating and birth happens at the same time, as female members of the species come into heat around a week after giving birth.