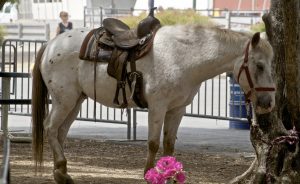 The Pony of the Americas, or the POA, was developed especially to be a child’s mount and show horse. For this reason, they must be very docile, gentle and obedient. POA’s are shown by children and are the root of many great and long-lasting friendships.

A well-trained POA has very good manners, including the ability to stand quietly, walk, jog, lope, and stop when requested and back readily. They are alert and confident animals. The POA is very friendly and docile, as it is bred specifically to be a child’s mount.

POAs are shown in such events as Western Pleasure, Reining, Games and Working cattle. As English mounts, the POA has been successful in dressage and jumping, and with good enough endurance to compete in three day events including cross-country.

Many POAs are shown in a variety of events, such as Halter, Western, Jumping, English, Driving, Western Games, Prince Philip Games and Trail. POAs are great animals; both for eventing and for pleasure riding. The Pony of the Americas is bred to be refined yet rather small.

They must be between 46 and 56 inches in height to be registered. They have a symmetrical, smooth head with a slightly dished profile. They should have mottled skin around the nostrils and lips and a wide forehead.

They are well-muscled animals, with sloping shoulders, prominent withers and deep chests. The forearms are also well muscled, with a broad knee and short cannons. The POA’s back is straight and short, and the hips, thighs and gaskins are all long and muscular.

In 1954, a man named Les Boomhower acquired an Arab/Appaloosa mare that had accidentally been bred to a Shetland stallion. The progeny of this mix was a very small foal with a white coat and a black hand print on its flank.

Les was intrigued by this foal and decided to, with the help of other Shetland Pony breeders, breed more such ponies and call them “Ponies of America.” The name derives from the location from whence the breeding stock came, primarily the Untied States, Central America and Canada.

Les and his friends established very strict breed standards, including a ruling that acceptable POAs must be between 44 and 52 inches, has a small head resembling an Arabs, a muscled body like a quarter horse, and the coloring of an Appaloosa.

They also sought to breed a docile animal that could be a child’s mount. Black Hand #1 was the first POA registered, and the numbers increased to 40,000 by 1996. The Shetland Pony was eventually bred out, with large ponies such as the Welsh and small horses like the Arab and the Mustang being used. 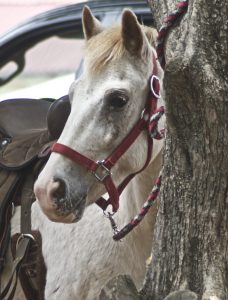 The specifications became less severe: for example, the ponies were allowed to be a little taller and people up to age 18 were allowed to show them. The POA has national shows and has a Register of Merit Awards.
Care of the Pony Of The Americas is similar to that of other horse breeds.

In general, a pony keeps weight better than most other horses. They eat less hay and less grain… the grain and hay that you do feed them goes a long ways. The care of a POA is the same as any horse they need food, water, shelter from mud (will cause hoof rot), rain and all poor weather conditions.

They require an acre of land per horse and lots of attention with exercise. A horse also needs to be seen by a blacksmith every 4 weeks or so and a frequent visit from the vet is good. Like most horses, they need to be wormed ever few months to kill any parasites that may harm them.