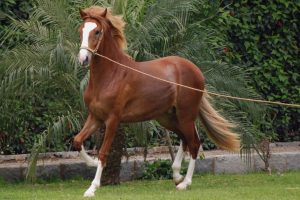 The Peruvian Paso is an even-tempered animal ideal for long-distance riding. They are one of the few naturally gaited horses in the world and are becoming increasing popular as gaited horses are making a comeback.

With a natural gait that can range in speed from a slow walk to a extended trot or slow canter, the Peruvian Paso has an entirely natural gait unaided by training or devices. They are, in fact, shown without shoes and with a natural hoof.

They are considered the smoothest riding horse in the world and have a self-assured way of acting that makes them carry themselves proudly. They have one of the most easy-going temperaments, because the Peruvians have worked hard to not breed animals that have bad dispositions.

Their spirit is defined as brio, a quality that gives them their arrogance and energetic behavior. Their gait is a termino, meaning it has a graceful movement with the forelegs rolled outward as the horse strides forward, similar to the arms of a swimmer. They were also bred for brilliant action, consisting of lift as the knee flexes. 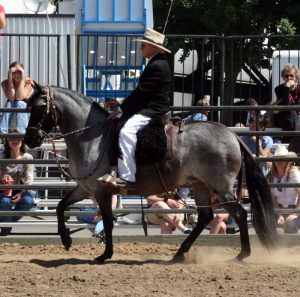 A moderately sized animal, the Peruvian Paso usually stands between 14.1 and 15 hands with weights ranging from 900 to 1,100 pounds. They are powerful animals with a well-muscled build. Common coat colors include chestnut, brown, black, bay, palomino, buckskin, gray, dun or roan.

The most desirable colors are solid colors or grays, with dark skin. The main can be curly or straight and is fine and lustrous. Until the 17th century, almost all domestic horses were gaited with trotted horses being used only as mounts for servants or as battle animals when quick speed is necessary.

Because the nobility knew very little about riding, they desired the smooth ride that a gaited horse offered. Even knights, who required a trotting horse for battle, usually traveled on a gaited horse and led their trotter behind.

Towards the end of the 17th century, however, trotting horses became more popular and gaited horses were almost unknown. The Peruvians, however, still held their gaited horses in high esteem and continued to breed what they called Caballo Peruano de Paso, or “the Peruvian horse of Paso.” 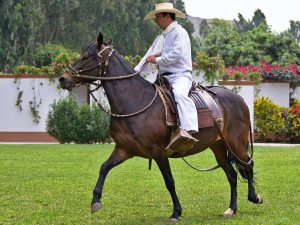 This was a naturally gaited horse, descended from Spanish breeds such as the Barb, Friesian, Spanish Jennet and Andalusian. This breed is the one that has the closest link to the gaited horses that were once populous. The Peruvian Paso is the only gaited horse that passes the gait onto 100% of its offspring.

Recently, gaited horses have become more popular as people rediscover the excellent ride of a naturally gaited animal. Because of this, the Peruvian Paso is becoming much more popular and is now considered one of the most ideal mounts for 20th century riders.