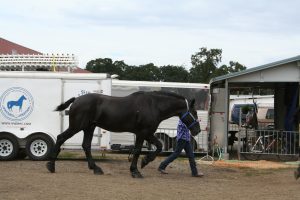 The Percheron is a large draft horse very popular in the United States and Canada. They are primarily a recreational horse and are often used for such activities as hayrides, sleigh rides and parades. They also compete in hitching and halter classes.

Known for its even temperament and good manners, the Percheron is a dependable animal that is willing to work. They are very useful on small farms and for forest work where motorized vehicles cannot travel. They are good draft animal, powerful and hard working.

They are very popular for pulling carriages and are often seen on sleigh rides and hay rides. Their noble bearing also makes them suitable for parades. A noble animal, the Percheron usually stands between 14.3 and 16.1 hands.

They have a fine head with a wide forehead, long ears and energetic eyes. The nose is straight and has wide nostrils. The head is set upon a long neck with a thin throat. They have slanted shoulders and a wide, deep chest. The breastbone is moderately prominent. 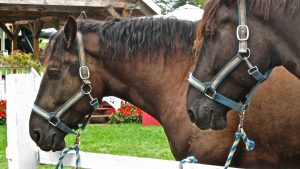 The back is strong, straight and short with rounded ribs. The girth is low and the hip is long. They have sound, clean limbs with powerful forearms and thighs. They are usually black in color and have an abundant mane.

The exact origin of the Percheron is unknown. It is believed by many that they are direct descendents of a horse found in the region of France during the ice age, while other think they are descended from the Boulonnais horse used by the Romans in the invasion of Brittany.

Another possibility is that they are bred from Abd el Rahman’s Arab stallions which were used by the Moors during the battle Poitiers that were taken from the Moors by the victorious French. It is known that at some point in their history the native French mares of the Le Perche region of France were mated with Arab stallions, once during the eighth century and once during the Middle Ages.

In the 19th century, a stud was established at Le Pin to develop mounts for the military. A horse named Jean Le Blanc was birthed at this stud in 1823, and all of today’s Percherons can trace their bloodlines to this animal.

Edward Harris imported the first Percherons to the United States in 1839. In 1851 the stallions Normandy and Louis Napoleon were imported to Ohio. Louis Napoleon was later sold to the Dillon family in Illinois, who were founders of the Percheron Association. 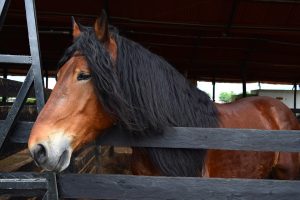 At the end of the 1800s, thousands of Percherons were imported to America. This wave of importation continued until World War II and quickly became one of the favorites of both farmers and teamsters responsible for moving freight in America’s cities.

In 1930, it was found that there were three times as many Percherons in the U.S. as other draft horses combined. Unfortunately, the invention of the tractor after World War II decreased the use of the horse and it became nearly extinct.

Many farmers however, primarily Amish, continued using the breed and kept it alive for the next twenty years. In the 1960s, Americans rediscovered the draft horse and began using Percherons once more on small farms and for forest work. Today, Percherons are a common sight in cities, pulling carriages.