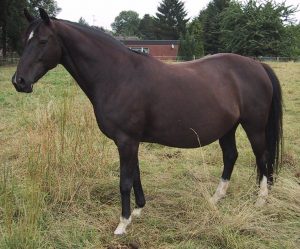 The Oldenburg is a moderately large, fairly docile animal bred in Germany. They were traditionally bred as carriage horses but have become very possible as riding mounts and in sporting events. They are very powerful animals.

Today, Oldenburgs are commonly used for show-jumping, dressage and three day event. They are also used occasionally for driving. Oldenburgs are known for their consitency in conformation as well as their power.

Their kind character and willingness to work hard under saddle has made them very popular animals. Oldenburgs have a natural athletic ability, making them popular as show-jumpers, a sport which is challenging and offers great rewards both in fame and in monetary advancement.

Oldenburgs are usually bred by private individuals. They are bred from stallions from a variety of other breeds, who must first pass a three day inspection by the Oldenburg Breeding Society. A large horse averaging between 16.2 and 17 hands, the modern Oldenburg retains a compact body type.

They have fairly short legs and short cannons. Their hindquarters and neck are very muscular and they have a deep chest. They appear in a variety of colors, most commonly black or dark brown. The Oldenburg was bred by Graf Anton Gunther von Oldenburg in the mid-17th century.

Oldeburg traveled through Europe and brought back to Germany the stallions of Naples, Poland, England, Tartary and Barbary, which he bred with native mares. These Oldenburgs became very popular throughout Europe and were used as riding horses and carriage horses for such royalty as Leopold I, King of the Roman Empire. 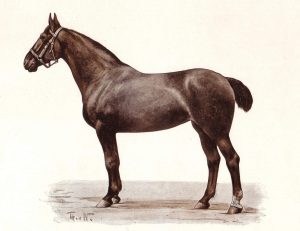 During the 18th and 19th centuries, the Oldenburgs were refined with blood of English Thoroughbreds. George I, the English Hannoverian King, contributed many Thoroughbreds to the breeding stock. During the war with Denmark and the French Revolution, the breeding program halted due to difficulties.

However, between 1820 and 1897 three things happened that improved the state of Oldenburg breeding and raised it to its present state. In 1820, a law was passed forbidding the use of any stallions but those approved by the government in breeding programs.

In 1861, neck and hip branding was instituted for approved registered horses and in 1897, two breeding societies were founded. In 1922, there were 3,250 registered stallions and 34,000 mares. With the advent of the automobile, the breeding program shifted from carriage horses to riding mounts and work horses. Since the 1930s, the Oldenburg breeders have sought to produce the ideal saddle horse.