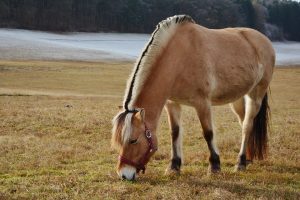 Norway’s oldest breed is the Norwegian Fjord Horse. This animal is also known simply as Fjord or Norwegian and is also known as the Norges Fjordbest, Fjording, Nordb ag, Nordfjord and Norther Dun. They are dependable, strong, obedient and sure-footed.

They have an excellent memory and can retain what they’ve learned over long periods of time, even when they’re not active. The Fjord Horse’s most popular characteristic is it kind, gentle disposition. The Norwegian Fjord horse is hardy, agile and sure-footed. 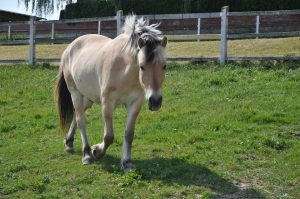 They are easy to ride because of their calm temperament and easy, balanced gaits. These traits make them excellent family horses and great teaching animals for children or inexperienced riders. They are well suited to both saddle and harness work and can be ridden English or Western.

To the inexperienced eye, all Norwegian Fjord horses look very much alike. They have very distinctive markings, including a dark dorsal strip that begins at the forelock and runs through the mane, over the neck and back and through the tail.

They also have dark banded legs and black fetlocks. The outer hairs of the mane and tail usually match the coat color, while the inner hairs are black. The main is usually cut short so it stands straight and reveals this interesting characteristic.

The Norwegian Fjord’s head should be medium sized with a broad forehead and straight or slightly concave profile. They have large eyes and small, alert ears. The Fjord’s neck is muscular and the head and neck together are elegant without being coarse.

They have a short, deep body and substantial girth. They are powerful animals with muscular legs and quarter, substantial bone, and good feet. They weigh between 900 and 1200 pounds. It is believed that the Norwegian Fjord horse is the world’s oldest and purest breed.

They are thought to have descended form animals that migrated to Norway and were domesticated around 4000 years ago. They have been selectively bred in Norway for 2000 years. Today’s Fjord is larger than the original animals, which averaged 12.1 hands. 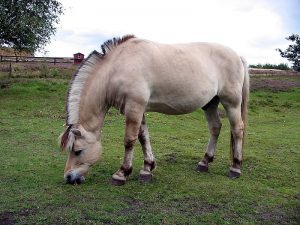 The primitiveness of the breed can be seen in its coloring: it is the only breed to exhibit only the primitive dun coloring. The Norwegian Fjord was important to the Vikings, who used them as war mounts. The Vikings are also believed to have been among the first Western Europeans to use horses for agricultural purposes.

Many people believe that all draft breeds present in today’s Europe descend in part from the Norwegian Fjord. Today, breeding in Norway is controlled by a government agency and only champion stock can be exported.

Norwegian Fjord Registries now exist in Canada, the U.S, Great Britain, Germany, Belgium, Sweden, Denmark and the Netherlands. In the mid 1950s, 22 Fjords were imported to the United States. These horses descendant’s are now scattered around North America.