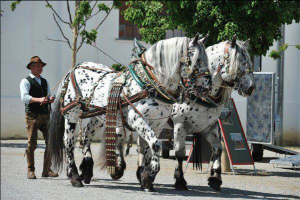 The Noric, also known as the Noriker, Norisches Kaltbult, or Pinzgauer, is an ancient breed that has been living in Austria for as much as 2000 years. They are a large animal, traditionally used as draft horses although they are becoming increasing popular as riding mounts, as the type is moving away from the heavy draft animal.

Known for their docile personalities and willingness to work, the Noric horse is popular for heavy work. They are less temperamental in difficult terrain than other workhorses. They are known as a versatile breed capable as serving as a riding mount, carriage horse or workhorse.

Norics are being used more and more as sport horses, especially as driving and riding horses. They have a good gait, a good sense of balance, a sure step, and are able climbers. Unfortunately, they are not very fertile and so their numbers do not increase quickly.

They are a very strong, and hardy breed. Norics are very large, with mares averaging between 15.2 and 16 hands and stallions between 16 and 17 hands. They have a straight profile with wide nostrils and medium sized eyes. The neck is medium length and has a thick mane.

The chest is deep and broad. This is a very muscular, powerful animal. Most Noric are bay, brown or chestnut with a flaxen mane and tail. Body markings are not acceptable, nor are too many markings on the head and legs.

The Noric is a descendent of a breed that has existed in the alpine piedmont of Austria for over 2000 years. Their ancestors were owned by the Celts as long ago as 500 B.C. The breed is named after the Roman province Noricum. 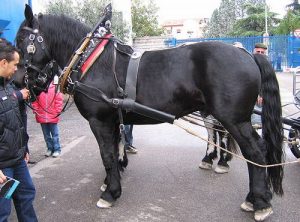 The Romans introduced heavy draught horses to Central Europe around 1A.D. This heavy breed crossed with the Celtic horses to produce a breed quite similar to today’s Norics. In the 8th century when Charlemagne was emperor, the breeding of these horses flourished.

The first stud farm that bred Noric horses was Schlob Rief in 1576. The archbishops of Salzburg controlled the horse breeding. The Salzburg archbishops oversaw and promoted the breeding of the Norics until the 17th century, when they drew up strict breeding guidelines.

The horses bred in Salzburg were primarily used as ceremonial or parade horses. In the 18th century, Norics became more common as agricultural animals. In 1820, the breeding programs were secularized and state-owned stud farms were built in Salzburg.

After this, other heavy breeds including Clydesdales, Belgians, Oldenburgs, Holsteins, Spaniards and Neapolitans were introduced to the breed. In 1885, new inspection guidelines were drawn up to counteract this interbreeding.

At the end of the 19th century the first registry was established. By 1903, 135 stallions and 1081 mares were registered. World Wars I and II greatly reduced the horse population. However, in the 1960s various breeding groups began to revive the breed.