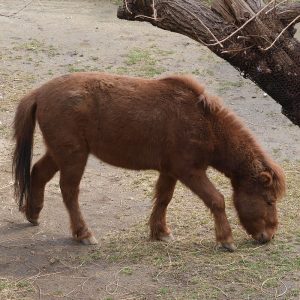 The Noma, or Noma-Uma, is a very rare breed of Japanese origin. They are likely descended from the same prehistoric animals that most of the native Japanese breeds are descended from. Originating in Noma County, Japan, the Noma is part of the local culture and heritage.

They are very strong and, because they don’t require high quality feed or large amounts of food they are very economical animals. The Noma is often used for riding and light draft. They are well loved by the native people because of their even-tempered nature and willingness to work hard.

They are also, like other Japanese breeds, adept at navigating difficult mountain terrain.The Noma is the smallest of the Japanese native breeds. The average 107cm in height. They have short backs and very muscular bodies. Their head is quite large in comparison to their bodies.

It is believed that most of the Japanese native breed descends from horses that came from the main continent to the Japanese Islands through the Korean Peninsula more than 2000 years ago. The Noma became a distinct breed during the Edo era, when the tono-sama (feudal lord) decided to feed the horses found on Uma-Shima (horse island).

This project failed because of disease and food shortages, but the feudal lord then moved the horses to Noma Village. He asked the farmers to feed the horses, giving the farmers additional money when the horse grew over the standard size of 121cm. 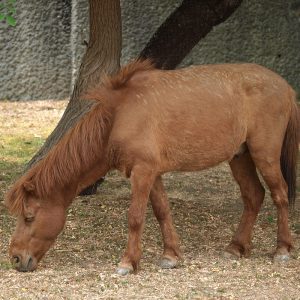 If the horse grew shorter than the standard, the horse was given to the farmer instead of the money. The Noma descended from the shorter horses. In Japan, the native breeds such as the Noma were very important in warfare until the introduction of firearms in the late 16th century.

Horsemanship was very important to members of the Samurai class. Horses were also important in Japanese religion-at Japanese shrines, one will often find a white horse. They are very rare, with only 27 pure Nomas existing in December of 1988.