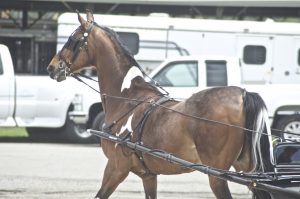 The National Show Horse was developed as a breed that would combine the characteristics of the Arabian and the American Saddlebred. They are a charismatic, exciting, athletic animal that thrills the crowds whenever they are brought into the ring.

Bringing a new excitement to the world of showing horses was the main purpose in developing the National Show Horse. They are an exciting horse and they pass the excitement on to the people who are watching them.

They have the beauty, stamina and refinement of the Arabian paired with the high-stepping motion and size of the American Saddlebred. They are very graceful yet athletic animals that always receive standing ovations from the crowd. They are sometimes called “The Peacock of the Show Ring.”

It exhibits balanced, powerful motion coming from the hindquarters, with flexion and extension in the front legs. In addition to their beauty and charisma the National Show Horse also has a wonderful disposition.

Averaging between 15 and 17 hands, the National Show Horse is a fairly large, attractive animal. They have a small head with a straight or concave profile, much like that of an Arabian. They have large eyes and small noses.

This elegant head is set upon a long, high-set neck without a pronounced crest. They have pronounced withers and sloping shoulders. The back is short and level. They have long forearms and short cannons in front, with long, angled pasterns on both the front and rear legs. 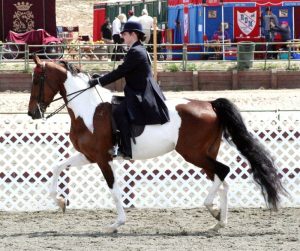 Any of the above three breeds can be used, provided the foal is 25%-99% Arabian. The National Show Horse is successful in halter; English pleasure; pleasure driving; fine harness; five gaited; three gaited and Western pleasure.