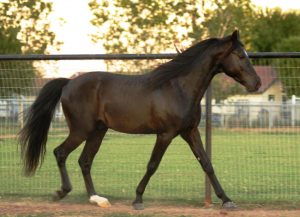 They are primarily show and pleasure horses, though they are also used for cross-country trail and endurance riding. They have a very calm and friendly disposition, causing them to be named “the common man’s pleasure horse.”

The Missouri Fox Trot has a diagonal gait. He walks in front and trots behind, known as the “fox trot.” His is not a high-stepping gait but a sure-footed one. The back feet have a sliding action, making a very smooth ride for the rider. 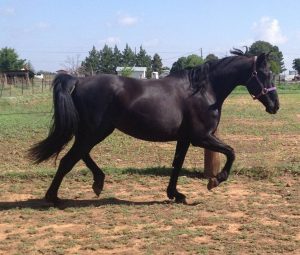 The Missouri Fox Trotter is an average sized animal, standing between 14 and 16 hands high. They have good conformation and are proportionate, both in height weight . Their necks are graceful and moderately long. They have a neat, cleanly shaped head with pointed ears and large eyes.

Developed in the Ozarks during the 19th century, the Missouri Fox Trotter was bred by settlers who needed sure-footed, quickly moving horses with good endurance. When Missouri achieved statehood in 1821, many settlers from Tennessee, Kentucky and Virginia entered the state, bringing with them their saddle horses. 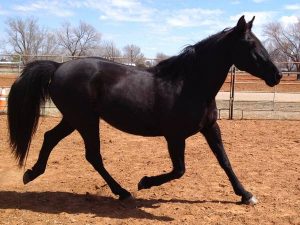 The settlers found that horses that could perform the “fox trot” gait were best able to navigate the rocky Ozarks and began selectively breeding for the gait. The Missouri Fox Trotting Horse Breed Association was founded in Ava, Missouri in 1948.

Fifteen men interested in preserving the breed formed the association and began registering the horses. After quite a few horses had been registered, a fire destroyed the studbook. The breed association was reorganized in 1958. Today, over 52,283 Missouri Fox Trotters are known to exist.