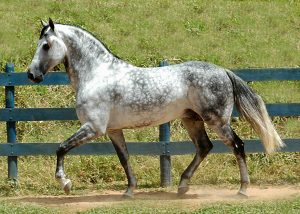 The Mangalarga Marchador, also known as the Manga Picada, Manga Batida and Brazilian Paso, is a Brazilian Gaited Horse. This breed should not be confused with the Mangalarga, which is NOT a gaited horse.

An incredibly versatile animal, the Mangalarga Marchador is used in a variety of tasks both competitive and domestic. They are used in the management of farms and ranches in Brazil and also in non-specialized sports, including cutting, endurance riding, trail riding, jumping and polo. They are strongly appreciated by aficionados of four-beat gaited horses.

The Mangalarga Marchador has two special gaits, known as ‘marchas’ in Portuguese. These are the marcha picada, which stands for ‘light touch’, and marcha batida, meaning, ‘to hit.’ The marcha picada is the smoother of the two gaits. It is a broken pace, creating little vertical movement. The legs are moved in lateral sequence with periods of triple hooves support.

This gait can be kept up for extended periods. Marcha Batida is like a broken trot. The legs are moved in a diagonal pattern, with moments of triple support and four beat sequences. Unlike a trot, when performing the gait, the horse is always in contact with the ground.

The Mangalarga Marchador is a moderately sized horse, averaging over 15 hands and weighing between 900 and 1100 pounds. Horses under 14.2 hands are not accepted for registration. The Mangalarga Marchador’s head is triangular with a straight profile, reminiscent of the Barb horses. The neck is of medium length, well arched and muscular. 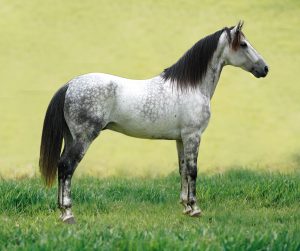 The back is also of medium length. The entire horse is quite muscular and powerful. The coat is fine, silky with a full mane and tail. Common coat colors for the Mangalarga Marchador include grays, bays and chestnuts. It is the national horse in Brazil.

The foundation for the Mangalarga Marchador breed was a stallion by the name of Sublime. He was presented to Gabriel Francisco Junqueira, Baron of Aldenas and owner of the breeding farm Hacienda Camp Alegre, by his friend Prince Pedro I who was later the Emperor of Brazil. Sublime was the progeny of a native mare of Spanish Jennet and Barb blood.

The name ‘Mangalarga’ is derived from Hacienda Mangalarga, a breeding farm that acquired horses from Camp Alegre. The Mangalarga Marchador has been specifically bred for over 180 years. It is believed that no other breed has been added.

The Associacao dos Criadores do cavalo Marchador de Raca Mangalarga was the first breeder’s organization, establish in 1949 in Belo Horizonte to set breed standards and improve the Mangalarga as a unique breed. There are now 7000 members of the ABCCMM with almost 190,000 registered horses. They made their way to America in 1991.