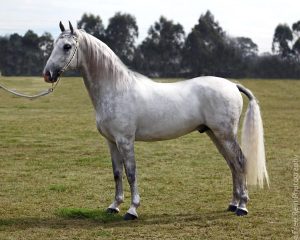 Lipizzans, also known as Lipizzaners, are intelligent, docile, hardy animals. They are very attractive horses that usually appear in shade of white. While a well-known breed, they are quite rare, with only 3,000 purebred Lipizzans remaining in the world today.

A result of breeding Arabians brought with the Moors to Spanish native breeds, the Lipizzaner makes its home in Spain even today. Lipizzans are the principle breed in use at the Spanish Riding School, where they are also bred. The Spanish Riding School seeks to continue the art of classical horsemanship and the Lipizzaners are well suited to the task.

They are very docile, making them suitable animals for younger mounts, yet energetic and intelligent. They are very successful in dressage. While Lipizzans are small, they are very powerful which makes up for their small size. They mature late, around ten years or so, and can live up to 35 years or more. They are elegant, noble animals. 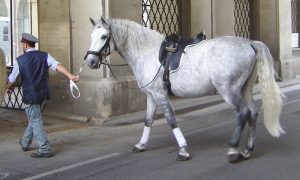 Lipizzaners are full grown around seven years of age and when placed next to another horse of the same age (i.e. a Thoroughbred) may appear very small. Around eight months old, Lipizzaners enter an awkward stage (as do most adolescents). From eight months to three years, the Lipizzaner is barely recognizable as one of this noble, elegant breed and instead is scraggly and spindly.

In Austria, these adolescent Lipizzans are turned into the Alps where they are out of the view of tourists and are brought home at age three. This is when their elegance returns. The Lipizzan is a loyal, obedient animal. In the paddock, they often seem world-weary.

However, when turned out or when being ridden, they display a fiery temperament. Finally, when approached on the ground by a friendly person, they immediately become docile and obedient, without losing their pride.

A moderately small animal, the Lipizzan usually stands under 16 hands. However, their regal bearing more than makes up for their small stature. They have a sturdy body and a short, strong neck. Their head is similar to Arabians, especially in the small ears and shape of the nose. They have short, strong legs and heavy shoulder.

The tail is carried high and both the tail and the mane are thick and luxurious. Over all, the Lipizzaner is a picture of grace and nobility. They are usually born black, brown or gray and lighten to white, between six and ten years of age. Their skin is dark, so when wet the horse appears gray. Lipizzans used to appear in other colors, including black, bay and roan, but these darker colors were bred out and are very rare today. 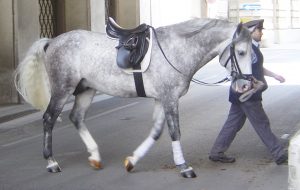 In the early 1560s, the Moors occupied Spain. They brought with them their horses, the fine Arabians, who bred them with native Spanish horses. This resulted in a breed that was considered the epitome of horses for the classical riding that returned during the Renaissance period.

Maximillian II of Austria was an aficionado of the Spanish breed and brought them to Austria in 1562, where he found the court stud at Kladrub. In 1580, Maximillian’s brother Charles established a stud at Lipizza. It is from this stud that the Lipizzan got its name. The Kladrub stud was known for producing carriage horses, while the Lipizza stud was famed for its riding horses.

The two studs, because they were near to each other (and owned by brothers) often exchanged breeding stock. Two of the foundation stallions of today’s Lipizzan came from the Kladrub stud. Today, after four hundred years of selective breeding, the Lipizzan is not only one of Europe’s oldest breeds but also one of its most beautiful and respected.