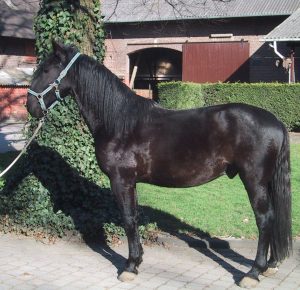 The Kladruby, known as Kladrubsk in Czech or Kladruber in German, is a large horse traditionally used as a carriage horse. It is known for its strength and even temperament. An excellent carriage horse, the Kladruby is popular in Eastern Europe. They are also successful at international driving events.

They are driven in teams of up to eight pairs, although the larger teams are quite uncommon. The Kladruby is very strong and has a stable temperament. They are becoming increasingly popular as riding mounts. Besides being used for riding and as carriage horses, the Kladruby is also used for farm work. They are known for their longevity and stamina. The Kladruby is very intelligent and calm, yet energetic and generous. 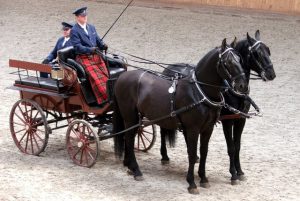 A large animal, the Kladruby stands between 16.2 and 17 hands. They resemble the Lippizaner and the Andalusian breeds in appearance. They have a long head with a convex profile, broad forehead, large eyes and flared nostrils. The neck is muscular, as are the shoulders. They have a deep, broad chest and a long, straight back. The legs are strong and have clean joints and slender cannons. The foot is well formed. The Kladruby is always white, gray or black.

Deriving its name from the Kladruby stud founded by Emperor Maximillian II in Bohemoa (Czechoslovakia), the Kladruby breed has been in existence since the formation of the stud in 1572. It was bred by crossing native horses with Spanish foundation stock. They were originally bred to draw the Imperial carriages. 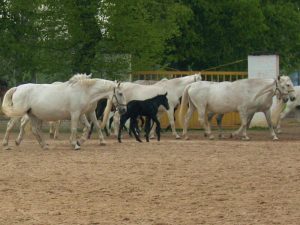 The Kladruby was first registered in the 1700s. The modern breed is found primarily in black and white. The white horses are bred at the Kladruby stud, with the Favory bloodline of Lippizaners used to revitalize the stock. Two black stallions named Sacramoso founded the black line. These black horses were originally used to pull the carriages of clerical dignitaries.

In the 1930s, many of the members of the black herd were sent to the meat processor. The Research Institute for Horse Breeding, found in Slatinay, is working to re-establish the line. The Kladruby is unique in that it has a traceable line of over 400 years. The Kladruby is the only native breed of what was once Czechoslovakia.