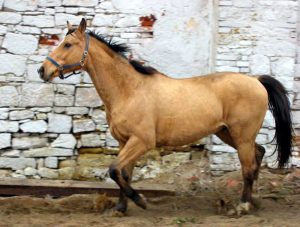 The Kisber, or Kisber Felver, is a Hungarian breed that exhibits all the necessary traits of an ideal sport horse. They are considered one of the world’s most beautiful sport horse and members of the breed have been quite successful in racing history.

Among the traits exhibited by the Kisber are conformation, athletic ability, movement and temperament. Kisbers are known as “The World’s Most Beautiful Sport Horse.” The Kisbers embody beauty, endurance, mental and physical balance, and an excellent character. They are also quite docile. Besides racing, Kisbers are used in jumping, cross-country, and other events.

Kisbers are quite large, reaching between 15.3 and 17 hands. They appear in all solid colors, including palomino and buckskin. Kisbers can be crossed with Trakehners, Thoroughbreds, Arabians, Anglo-Arabians, Shagya Arabians and Selle Francais. They have strong limbs and feet. They are usually well proportioned and well-muscled.

Deriving its name from the stud at which it was bred, the Kisber originates from the Kisber Stud in Hungary. This stud was founded in 1853, primarily for the breeding of Thoroughbreds. However, they also developed an influential half-breed, the Kisber Felver. Thoroughbreds who helped develop the breed include “Fenek,” “Filou,” “Dunue,” “Maxim,” and “Honpolgar.”

The Thoroughbreds were often bred with Trakehner mares, or vice versa. Unfortunately, most of the breeding stock was taken from the Stud as booty after World War II. Other Kisber Felvers were taken to be used as improvement stock in other breeds. Kisbers arrived in North America, where they were imported for the US Remount.

When the remount disbanded, they were auctioned off to people who did not know the value of the breed. However, it is only through the auctions that this breed exists in North America at all. The Kisbers are dying out, but organizations both in Europe and in North America are fighting to save to the mere 2000 Kisbers left in the world.