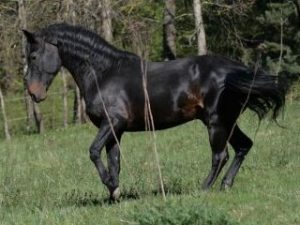 Known as “The World’s Best Mountain Horse,” the Kabardin is a sure-footed, economical mountain animal. They can navigate very difficult terrain and are very reliable. With its native home in the northern Caucasus, the Kabardin is naturally a very sure-footed animal.

They are one of Russia’s “extreme” breeds, meaning that they can live and work under extreme conditions. They are quite possible the world’s best mountain hourse and can navigate and survive in a land made up of snow, ice and fast moving rivers. Kabardins are very good at finding their way through fog, mist and darkness. They are obedient and docile with great stamina. They are not fast animals but have great stamina. They have high action with an even and rhythmical walk and a light, smooth canter and trots.

There are three types of modern Kadarbins. The basic type is the most predominant and is a typical mountain horse. They are lean and well-muscled with a well-shaped head. The oriental type shows the influence of various oriental breeds. They have smaller heads than the basic type, expressive eyes, clean legs and thinner skins. The massive type is closer in size and appearance to a carriage horse than the other types. They have longer bodies and larger bones.

Popular since the 16th century, the Kabardin was bred by the tribesmen in the Northern Caucasus mountains. The sturdiness of the breed can be attributed to centuries of selective breeding for survival. They are derived from the Karabakh, Persian and Turkmenian breeds brought with the steppe people as the crossed the mountains.

The best Kadarbins, raised at the Karachai and Malka studs, are used to improve native stock in Armenia, Azerbaijan and Georgia. One type of Kadarbins is known as the Karachai sub-breed (massive type) and are often referred to as their own breed. Kadarbins were crossed with Arabs by Count Stroganov at the beginning of the 20th century and are today widely crossed with Thoroughbreds. 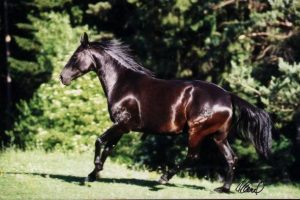 Kadarbins were ridden by mountain tribesmen because they knew the horse would not flinch at traversing very difficult terrain and would find its way back to the herd if lost. They also were ridden because of their great endurance, both by the tribesmen and by the military as cavalry mounts during World War II.

In the winter of 1935/1936, a 3,000 kilometer trail ride proved Kadarbins and Anglo-Kadarbins to be the best all-around endurance horses. In 1946, a Kadarbin stallion by the name of Ali-Kadym won a 250 kilometer ride by finishing in a mere 25 hours.