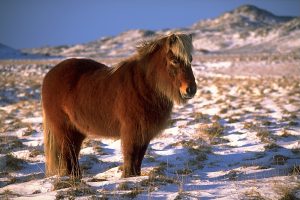 The Icelandic Horse is a small, rugged and versatile animal that is popular not only in its native Iceland but also around the entire world. They are energetic, friendly, self-assured animals that make great companions. With five gaits, the Icelandic has a way of moving that fits any situation. Their walk is a relaxed, brisk four-beat gait.

The trot is two-beat, where the front and hind legs on opposite sides of the horse move at the same time. It is often used for basic training. A three-beat gait, the gallop or canter, can be done at various speeds. Allowing a horse to gallop can liven its spirit. The specialty of the Icelandic, the tolt, is a smooth four-beat gait in which the horse moves its feet the same as for a walk. However, it is much faster and is sometimes called a running walk.

It is a very smooth gait that can be ridden at any speed. Icelandics also pace a two-beat gait in which the horse moves both legs that are on the same side together. The Icelandic is a very strong animal that can pull several times its own body weight. It is the only breed native to Iceland and is ridden by everyone, including very large men, despite its small size. However, when Icelandic people are traveling they usually bring at least two horses and switch off.

The Icelandic is a very fun, friendly animal to ride. They are economic and low-maintenance, and are very long-lived. Some Icelandics are known to have lived well over 50 years! There are about 3000 Icelandics in the United States and 80,000 in Iceland.

They are very versatile and can be shown in almost any discipline that exists, although some Icelandics are better than others at certain classes. Icelandics are very calm and willing to work out of saddle. Under saddle, their temperaments differ depending on their training. They are herd animals and do not enjoy being alone.

The Icelandic Horse usually stands between 13 and 14.2 hands and weighs around 900 pounds. They have thick manes and tails and have a thick double coat in winter. In the summer, however, the coat is sleek and smooth. Icelandics are stocky, sturdy animals. They appear in 42 different color patterns.

The only equine on Iceland, the Icelandic horse is the same animal that the Vikings rode. They were also a standard mount of “knights in shining armor” and were popular in jousts. When the Vikings settled Iceland well over 1000 years ago, they brought with them horses on the Viking long boats. After the first importation, the Chieftains forbade any further importation because they were afraid the plague would be imported along with the horses.

Since then, the ban against importing horses to Iceland still holds and so the Icelandic breed is still almost entirely pure. Recently, many Americans have begun breeding Icelandics and the United States Icelandic Horse Club has been established. As mentioned above, there are today around 3000 Icelandics in the United States, which is nothing compared to the 80,000 in Iceland. 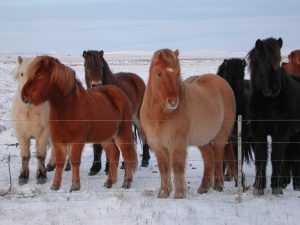 Icelandics cannot be exported out of Iceland after a certain age and they must be checked and x-rayed for spavin before being exported. It costs around $2,000 dollars to export a horse from Iceland, beyond the cost of the animal itself. Icelandics can be saddled with whatever type of tack is best suited to their discipline. However, it is essential that Icelandic’s tack fits well. They should be kept with at least one other equine animal as they are herd animals and will not be happy by themselves.

Some Icelandics are prone to summer eczema, or sweet itch. This is because this condition is unknown in Iceland and so they have no immunities. Ground flaxseeds can help, but it may be necessary to blanket an inflicted animal from head to toe. Because of their longevity (averaging 35-40 years or more), Icelandics are capable of producing many foals in their lifetime. Broodmares often can give birth into their late 20s. Beginning at age four, mares can be bred. They give birth after eleven months. There are rarely complications with birthing.