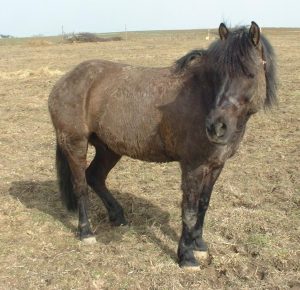 The Hucul, also known as the “Carpathian Pony,” is native to the Carpathian Mountains in what is now Romania. They are neat and calm, and make good draft horses or riding horses. Friendly, calm, and easy to feed, the Hucul is often used to carry loads in forests, as pack animals, or as riding horses in the mountains.

They are a unique breed. Today, there are only 500 breeding mares in the world. Various breeding programs have been implemented to improve the numbers. The Hucul is an excellent breed for a variety of reasons. They have great stamina and endurance as well as friendliness as their main traits.

A solidly built, aesthetically pleasing animal, the Hocul is well muscled with slightly sloped shoulders and well-formed flanks. The withers are pronounced and the Hocul’s back is straight and long. They have a well-proportioned head with a full forelock, small eyes, and small ears, and a muscular neck. Common coat colors include bay, palomino, dun and gray.

The Hocul is indigenous to the Carpathian Mountains in Eastern Europe. The first written record of the breed dates from 1605, although it is believed that the Hocul has been in existence since the 13th century. It likely descended from crossing wild Tarpan and Mongolian horses introduced to the region by Mongol tribes. 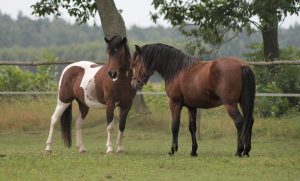 The first stud farm for Hoculs was established in 1856 in Roaduti, Romania. Thirty-three horses were sent to Czechoslovakia in 1922 to establish a herd. However, a great number of those horses were destroyed during WWII. In the early 1970s, aficionados and breeders of Hoculs joined forces to establish the Hocul Club.

In 1982 a stud book was established that listed fifty purebred animals. The popularity of Hoculs is increasing with their numbers. While still virtually unknown in the United States, the Hocul is earning popularity as far from its native land as England.