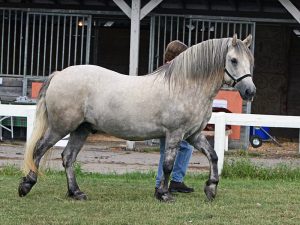 The largest of all Britain’s native pony breeds, the Highland Pony is a versatile, authentic animal that dates back hundreds of years. They are primarily workhorses and are also used for trekking, driving, endurance riding and other recreational purposes.

Known for their easygoing temperament and native intellect, the Highland Ponies are native to the mountains of Scotland and northern Great Britain. They were and still are, often used to carry game home from hunting trips. There are two types of Highland Pony: The Mainland Pony and the Western Isles Pony, more active than the Mainland Pony.

The Highland Pony is capable of carrying very heavy loads over long distances and difficult terrain. Their development in the mountains of the British Isles made them capable of navigating the steepest, rockiest slopes available. The Highland Pony lives outside year round, no matter what the weather is. They are very uncomfortable and usually will not appreciate being stabled. While rare in the United States, the Highland Pony is probably the most common pony is Scotland.

They appear in a several shades of dun, ranging from very light cream to red-brown, and can also be found in bay, black and gray. Their coat is sleek, smooth in the summer, thick and wooly in the winter. Their mane, for the most part, is very dark, as is their legs and tail. Most Highland Ponies have primitive marks such as stripes along the shoulder and ‘zebra’ stripes on the legs. 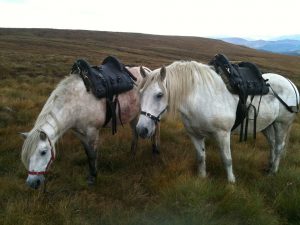 It is known that by 800 BC, ponies related to the Highland Pony, were in Scotland. Highland Ponies were first described in writing in the travel and agricultural accounts of the 18th century. Most of today’s Highland Ponies can trace their bloodline back to ponies that lived in the 1830s. Unlike most other breeds, controlled breeding was never utilized to improve the Highland Pony.

Living primarily in the wild, selective breeding was done by nature. However, in 1890, the Faillie Stud was founded in Skye, Scotland by the Department of Agriculture to improve the agricultural uses of the Highland Pony. The stud moved to Inverness in 1913, where its name was changed to Knocknagael. The National Pony Society monitors the breeding and development of the Highland Pony breed. Today, there are about 5,000 to 6,000 Highland Ponies worldwide. Most of these still live in Scotland, with some in England and very few in the United States.