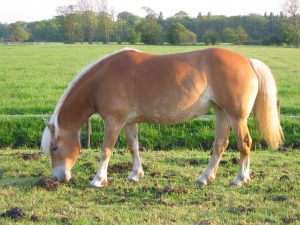 Haflingers are small, attractive, intelligent horses that originated in Hafling, Austria (today Hafling is part of Italy) in the 19th century. They are famed for their excellent temperament which is considered as important as good conformation. They are ideal as an all-round family ride & drive pony and can also be a successful competitive animal in dressage, driving, endurance riding etc. While moderately rare, the Haflinger is rapidly becoming more popular because of its diversity.

Today’s Haflinger is found internationally. They are very friendly, willing, and hard working. Haflinger’s have a very lovable and caring personality. In addition they are very willing and quick to learn. They most often become like part of the family. They are very versatile animals, and are used not only for dressage and jumping but also for draft work, packing, light harness and combined driving, western and trail riding, endurance riding, vaulting, and therapeutic riding programs.

In sum the Halflinger is a truly wonderful horse. One enthusiast suggests, “. . .if you plan to buy one, be prepared you may find yourself purchasing more in the very near future.” Part of what makes the Haflinger so special is its appearance. They are fairly small animals, usually under 15 hands, and are quite attractive. They have golden chestnut coats with long, flowing, white manes and tails.

The history of the Haflinger begins as long ago as the medieval times. Writings from that time period mention an Oriental horse found in the Southern Tyrolean Mountains in what is today Austria and northern Italy. These horses were domesticated and used as transportation on narrow mountain paths between villages and farms. 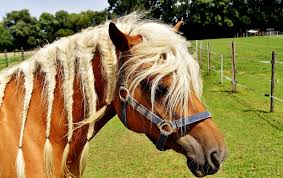 The first official record of the Haflinger is from 1874, when a half-Arab stallion and a native Tyrolean mare gave birth to a foal, Folie. All of today’s Haflingers can trace their ancestry to Folie. During World War II, the breed was bred as pack horses for the military. After the war, the breeding program returned to its primary goals, to develop a small, versatile horse that can be used for riding and driving, with a strong constitution and steady personality.

The Haflinger was first brought to North America in 1958, when Tempel Smith of Wadsworth, Illinois imported them from Austria to breed with his Lippizan horses. Other people joined in the importing of Haflinger, and they are now quite a few importers and breeders in the United States and Canada, as well as all over the world. Haflingers love their food but can get overfat if fed on lush pastures.