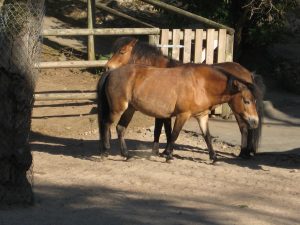 The Gotland Pony, known as “Russ” in Swedish and also as “Skogsruss,” “Gotlandsruss,” “Skogsbaggar,” and “Skogshast” is very well known as a child’s mount. They are small and docile and can also be used for agricultural work. The Gotland Pony is a primitive breed that has been known on the island of Gotland for thousands of years.

Extremely popular as a children’s horse, the Gotland Pony is also successful as a jumper, dressage horse and draft horse. Gotland ponies are also strong enough to hold most adults and they are great for a first mount, as the Swedish crown Princess Victoria has discovered. They are known for their friendly nature and willingness to work hard. However, they can also be somewhat stubborn. The Gotland Pony has lived in the wild for centuries, and possibly for millenniums, which has made them very sturdy animals. They are known for their stamina, which enables them to trot for days on end.

Gotlands average 11.2 to 13 hands at the withers. They have a light and elegant conformation, with pronounced withers, a long back, and a sloping croup. The Gotland’s legs are very strong with hard feed. Common colors are dun and bay, although all colors are possible. For a Gotland to be pedigreed, it must not be albino, roan or piebald. 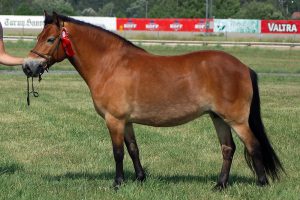 The oldest written reference to the Gotland Pony comes from a legal document from the 13th century, which mentions “the wild horses of Gotland.” Starting in the mid-19th century, many Gotland Ponies were sold to countries such as England, Germany and Belgium where they were used for mining and other hard labor. At around the same time, public lands on Gotland were divided between farmers, which resulted in cultivation of the forests where the ponies roamed. As a result of these two acts, the number of Gotland Ponies in existence dropped to around 150 by the beginning of the 20th century.

Luckily, around this time people began to take notice of the primitive breed and stud farms were established to propagate the breed. However, the Gotland Pony’s numbers continued to decrease. During and after World War I, rationing and food shortages led poachers to hunt the Gotland Pony for food. By the 1920s, they were almost extinct.

Soon after this time, a few native farmers joined forces with the Gotland Agricultural Society to save the pony. They fenced in around 200 acres and seeded it with eight animals. Soon a colony had been established which was then used to breed more ponies. Today, there is a free-roaming Gotland Pony herd on the moor.