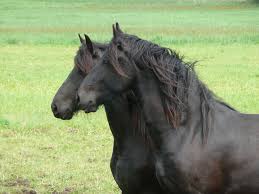 Very talented animals, the Friesian’s qualities as a show horse are once again being recognized by the horse-loving public. They are often used in harness shows, where they demonstrate a high, fast trot; recreational and competition driving; riding, where their intelligence, obedience and showmanship make them ideal competitors in dressage; tilting at the ring, an even in which the Friesian pulls a wide variety of carriage; and quadrille, a show number in which 8 sjees are drawn by Friesians and driven by a man and a woman dressed in traditional costumes.

The Friesian is greatly appreciated for its qualities as a trotter, with high-stepping action and elegance. They are also used in circuses where their easy temperament and instincts for showmanship, paired with their striking appearance, make them good choices.

A moderately sized animal, the Friesian stands around 15 hands. Their neck is low-set and carried vertically, and the head is carried high. They have expressive faces that reflect their easy-going personalities. They are very muscular, especially in the legs and quarters. One of the most striking physical characteristics of the Friesian is its mane and tail, which are never cut and quite often grow to the ground.

They have a significant feather and the leg hair grows from the middle of the leg on down. Friesian, while once appearing in browns and bays, are today only black. A white star on the forehead is permissible. Many people believe that the Friesian breed dates back 3,000 years. 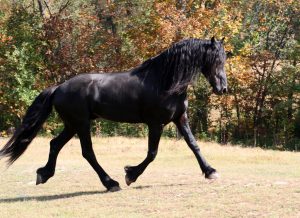 However, it is believed that today’s Friesian developed in northern Europe in the 12th century. Friesians were the chosen mounts of the Teutonic Knights and carried the knights into battle during the crusades. Friesians were much appreciated because of their ability to carry heavy loads while subsisting on meager rations and still maintaining their speed, agility and power.