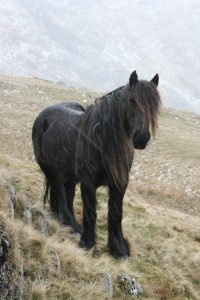 Because feed is often quite scarce in their native land, they are accustomed to eating little and using their food efficiently. If provided with sufficient shelter, they can live outside and fend for themselves in a wide range of weather conditions. Fell Ponies are commonly seen in riding stables – being used for trail rides.

They are also used for driving and in dressage competitions. Fell Ponies are noted for their ability to trot at a steady speed over great distances, a trait inherited from their ancestors, the now extinct Scottish Galloway pony. The Fell Pony is courageous, hardworking and docile, although it can also be rather mischievous at times.

Although the breed is fairly docile and known for its excellent temperament, Fell ponies also have a strong sense of self-preservation – the result of centuries of semi-feral ranging over the Northern hills. They need to form a working partnership with their trainers and to learn to trust their rider’s judgment. This may make them unsuitable for nervous adults or small children. They are, however, very well suited for riding for the disabled

To the untrained eye the Fell Pony resembles the Friesian horse in appearance, the Fell Pony can reach up to 14 hands although the average is somewhat smaller, at 13 hands 2 inches. The Fell Pony is an extremely handsome horse. They have a long neck topped by a neat, pony-like head. The head has a broad forehead, large bright eyes, small ear and large nostrils.

They have well-sprung ribs with muscular loins and quarters. The Fell Pony’s legs should be strong with plenty of bone. Fell Ponies are primarily black, although some browns and bays exist. The mane and tail are long and lustrous, and they have feathers from the knee down. 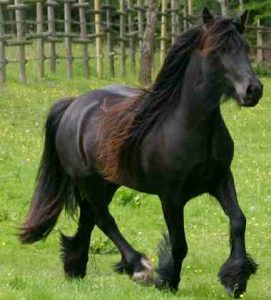 Though it was once believed that the Fell Pony was a descendent of the Friesian Horses left behind by the Roman Conquerors that bred with native mares, more recent archeological studies indicate that the history of the Fell pony breed is less tied to the Friesian horse (which was a coarse workhorse in Roman times) than was previously thought. Cavalry auxiliaries from several other parts of the Roman empire where stationed on the Roman wall and likely brought horses from Spain, France, Portugal, Germany and even possibly North Africa.

These breeds may have contributed to the ancestors of the Fell pony. The Fell Pony was recognized as a distinct breed in 1916, when the Fell Pony Society was formed. The Fell pony society of England is the mother registry for Fell ponies throughout the world. It is important not to overfeed your Fell Pony