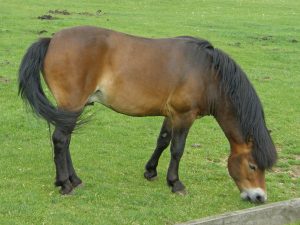 One of the oldest, purist native British breeds, the Exmoor is believed to have arrived in Britain while it was still attached to the rest of Europe. They are a versatile, sturdy breed. They have an independent nature, but love children and make and ideal pony for children or people with disabilities.

Exmoors are by no means ponies dependent on human beings. They have lived on the moors of England for centuries and have adapted to survive the cold, wet climate without much food or shelter. However, because of their versatility and adaptability they have been captured and used by humans over the years.

They are able to carry both children and adults and, because they can carry so much weight for a small size, are also ideal for the disabled. The Exmoor Pony is a hard worker, intelligent, and curious. Their native habitat is Exmoor, a moor in the southwest of Britain, which includes Somerset and Devon. In this environment, the Exmoor Ponies feed on moor grasses, heather, gorse, and rushes.

Because of the environment in which it lives, the Exmoor Pony has acquired several features unique to this breed. Among these are the “hooded-eye,” a heavy upper brow that protects the eyes from inclement weather, and the “snow-chute,” which is a group of short hairs at the top of the tail that allows ice and rain to slough off. The snow-chute sheds every summer to be re-grown in the winter.

The Exmoor’s coat is always either brown or bay with cream-colored markings around the eyes. It is sleek and shiny in the summer, but grows a double-coat in the winter, which keeps the pony warm and waterproof. Exmoors have broad foreheads, large eyes, and small ears. The legs are short and the hooves hard and well shaped. They usually stand between 11.2 and 12.3 hands in height. 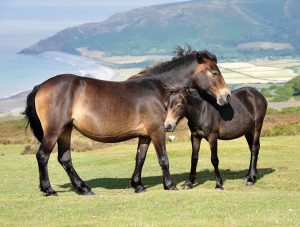 As mentioned above, it is believed that Exmoors wandered onto the moor before Britain was an Island. Fossil evidence from as much as 60,000 years ago supports this belief. They lived for many centuries with little human involvement, except for semi-annual hunting and round-ups. However, with the growing civilization of the moors (including motor travel and agricultural growth) the Exmoor population is declining.

Exmoors were imported into Canada in the 1950s and there are now several small herds in North America. While the Exmoor is a rare breed, with only 800 animals globally and around 40 in North America, the numbers are once again increasing thanks, in part, to the Exmoor Pony Society. This society was set up in 1921 and seeks to ensure the continuation of the purebred Exmoor line.